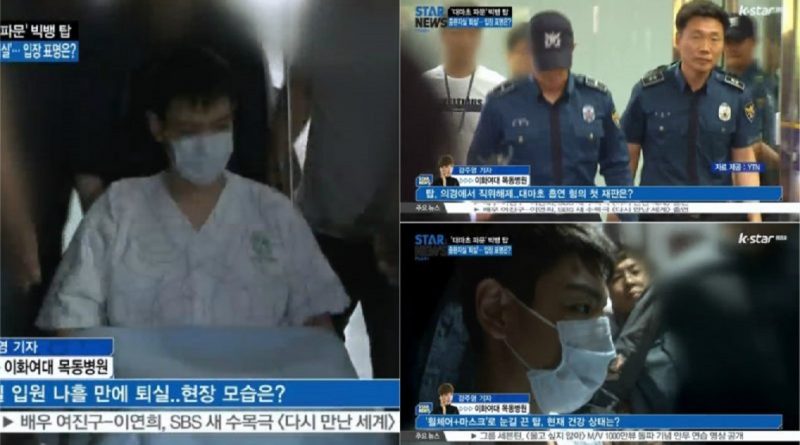 Big Bang TOP, who was treated in ICU since June 6th, has been discharged from the hospital. TOP left the building at 2.30 PM KST using a wheelchair. His face was covered in mask. While leaving the hospital, TOP only said ‘I’m sorry’ to the journalists and reporters. Previously, it was reported that TOP had gotten better. His family planned to move him to another hospital. The last time public saw TOP was when he left the Gangnam Police Station on June 5th. The media crews asked many things, from the development of his trial, his condition, and his feelings, but TOP kept his silence. Not long after TOP left, TOP’s mother was also seen leaving the hospital an hour later.

On June 6th, TOP was rushed to ICU for being unconscious after taking anti-depressant medication. A day later, a team of doctors held a press conference to explain TOP’s condition upon arrival at the hospital. They confirmed that he’s still in critical situation. TOP regained his consciousness on June 8th, and he was immediately moved out from the ICU. In the afternoon of the same day, TOP’s mother returned to check his condition. At that time, she conveyed that TOP’s condition has improved greatly. Shortly afterward, news came out that TOP would leave the hospital the next day. It was also reported that TOP’s condition is getting better. He even could already walk around the hospital room.

TOP will still undergo trial, facing charges of marijuana abuse. Police conveyed that they have received a statement of recognition from TOP, so the case will be processed soon. The trial will be held on June 29, and the court will hear testimony from the defendants first. TOP himself has admitted to using the illicit drugs. If TOP is found guilty by the court, he can not continue his military service. However, if possible, TOP might return to his military service.