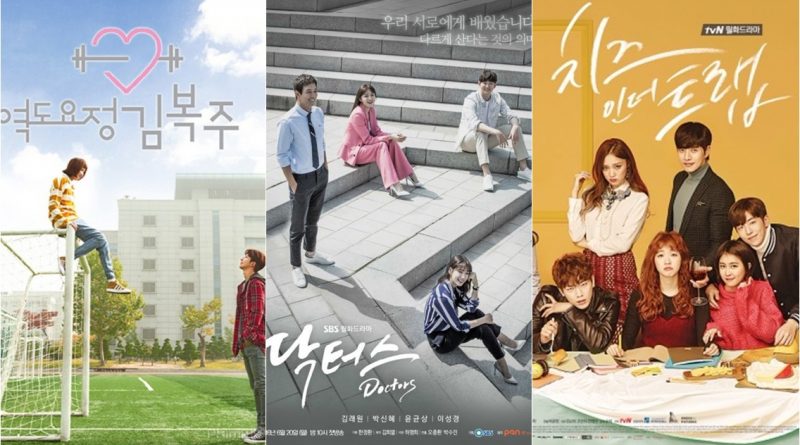 Lee Sung Kyung started her career in the entertainment world by debuting as a model. She participated in the 17th Korean Super Model Contest competition in 2008 and was ranked 11th. In addition, the beautiful woman born on August 10, 1990 also received a ‘Unix Hair New Style Prize’ in 2nd Asia-Pacific Super Model Contest in 2009 and was in the 5th position. Under the agency of YG Entertainment, Lee Sung Kyung began her acting career. In 2014 she first became a supporting actress in the drama ‘It’s Okay, That’s Love’ acting as Lee Kwang Soo’s lover. Her acting performance began to attract viewers’ attention after starring in ‘Cheese in the Trap’ in 2016. After that Lee Sung Kyung actively acts in various works and still continues her modeling activities in various fashion shows as well as starring in ads.

Weightlifting Fairy Kim Bok Ju is a youth-themed drama, inspired by the life of the Weighlifting Olympic gold medalist, Jang Mi Ran. The story tells of Kim Bok-joo (Lee Sung Kyung) who is a student at Hanwool Sports University. She has more power than any other child since she was a child. It is also influenced by her father who was a weightlifter. Her mother had died since she was a child. So her father opened a chicken restaurant, Bok Chicken, to finance their lives. She looks like a careless girl but is actually quite sensitive and a good observer. Jung Joon-hyung (Nam Joo Hyuk) is Kim Bok-joo’s childhood friend. He is a great swimmer, but he suffered a trauma and was disqualified in his first international match. Together with Kim Bok-joo, he overcame his problems and tries to find his dreams and love. The drama was aired on the tvN channel.

Doctors is SBS’s drama that aired in 2016 and starred Park Shin Hye, Kim Rae Woon, Lee Sung Kyung and Yoon Kyun Sang. Yoo Hye-jung (Park Shin Hye) is a stubborn high school girl with a thug-like personality. The injuries she gained as a child made Hye-jung shut herself from the others around her. However, she began to change after meeting her teacher, Hong Ji-hong (Kim Rae Won), who plays an important role in changing her life from being “hopeless” to a loving doctor. They splitted up and later meet again after 13 years when Yoo Hye-jung has become a doctor. Jung Jung has a best friend in high school named Jin Seo Woo (Lee Sung Kyung) but due to jealousy, Jin Seo Woo and Yoo Hye Jung quarreled and hostiled. After they became adult, Jin Seo Woo who comes from a doctor family grew to be doctor too and worked in the same place with Yoo Hye Jung. Jin Seo Woo likes Hong Ji-hong, but after seeing the development of Hong Ji-hong’s relationship and Yoo Hye-jung, she is jealous. This is what caused them to separate. She then forgot Hong and started liking Jung Yoon-do and once again Jung Yoon Do is interested in Hye Jung

Cheese in the Trap is a drama that aired in 2016 adapted from a webtoon of the same name, starring Park Hae Jin, Kim Go Eun, Lee Sung Kyung and Seo Kang Joon. It tells about the life of a student named Hong Sul (Kim Go Eun) who gets into trouble for dealing with his senior Yoo Jung (Park Hae Jin). She believes that the senior is not as good as others think and has a cruel side. Sul’s life becomes uneasy after being interrupted by Yoo Jung. But the longer, Yoo Jung was interested and even approached Hong Sul until both of them dating. Then there is Baek In Ha (Lee Sung Kyung) who is a girl who was cared of Yoo Jung’s family since childhood. In Ha puts her heart on Yoo Jung and performs various ways for Hong Sul to know the bad side of Yoo Jung. In Ha has a brother named In Ho (Seo Kang Joon) who is interested in Hong Sul and dislikes Yoo Jung.