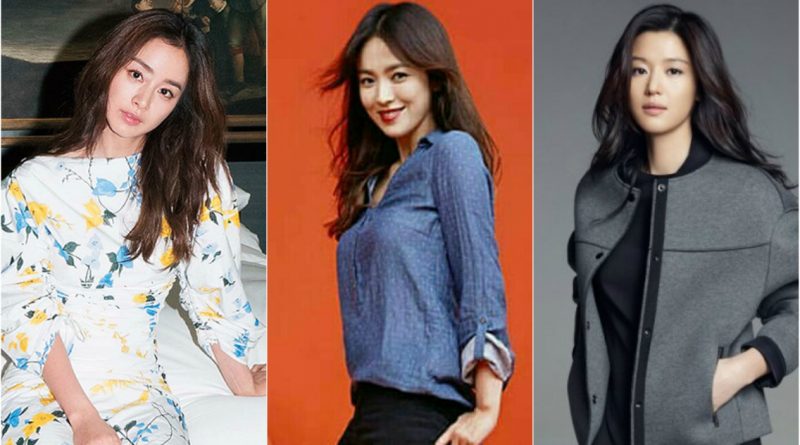 TaeHyeJi (Kim Tae Hee, Song Hye Kyo, Jun Ji Hyun), ‘The love of Everyone’, are having a pleasant autumn as a wife and a mother.

Kim Tae Hee, who got married to singer Rain earlier this year, is trying to live a life as a mother before giving birth in late October. Meanwhile, the couple recently traveled to Europe for the first time, Kim Tae Hee, with her D line body shape, was caught by the camera and attracted attention.

In January, the second generation from the couple who received support and blessing from many people raised the hopes of the two most anticipated celebrity couple. Fans are expecting the child of the 2nd generation best stars will inherit the beauty of his mother and father. Rain and Kim Tae Hee said that it is difficult to confirm the sex of a child because it is something personal. Whether he’s a boy or a girl, the interests toward Rain and Kim Tae Hee still continue.

Jun Ji Hyun is married to Choi Joon Hyuk, her boyfriend since 2012. Jun Ji Hyun, who gave birth in February last year, returned in six months and performed on SBS’s pre-production drama ‘Legend of the Blue Sea’ in August. On her comeback, Jun Ji Hyun is still admired by the public with her mesmerizing beauty.

Jun Ji Hyun announced the news of her second pregnancy a year after she returned. Jun Ji Hyun is currently six months pregnant and will give birth early next year. Jun Ji Hyun, who concentrates on taking care of her child after taking a break, attended a recent golf brand event and gathered topics with her six-month pregnancy.

Song Hye Kyo, the youngest of TaeHyeJi, is preparing for her marriage with Song Joong Ki on October 31st. Song Hye Kyo and Song Joong Ki who met while filming KBS 2TV ‘Descendants of the Sun’ develop love through the drama and finally decided to get married.

Like their dramatic love in drama, the two of them are showered with love and support from fans. Both recently went to America together to do their pre-wedding photos in Los Angeles. Kim Eun Sook, the writer of ‘Descendants of the Sun’ congratulated them said that they look really good together and she is happy for them.

June 17, 2018 Ria Comments Off on 7 Korean Celebrities Who Were Classmates At School
Rank&Talk STAR