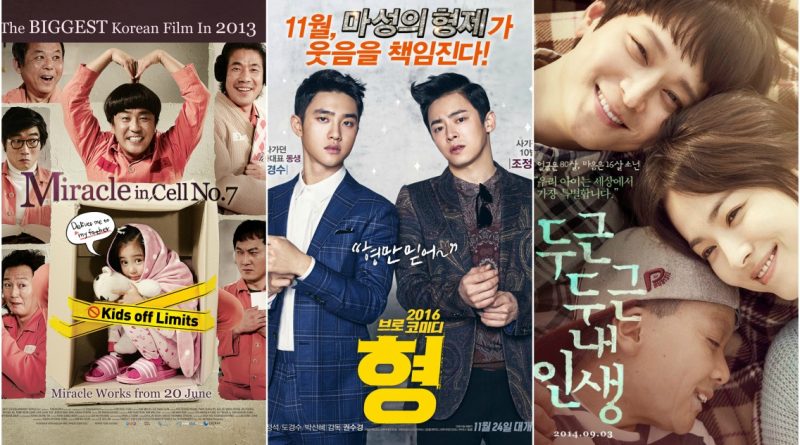 The South Korean movie released in 2013 ‘Miracle in Cell No. 7’ starred Ryu Seung Ryong, Kal So Won and Park Shin Hye. Miracle in Cell no 7 is a comedy and melodrama family movie about a mentally handicapped man who was accidentally jailed for allegedly killing a little girl. In his jail cell, he made friends with the cruel prisoners who helped him to meet his daughter again.

The film starring Do Kyung Soo, Jo Jong Suk, and Park Shin Hye tells the story of a Judo athlete named Doo Yong who lost his eyesight while competing. His brother Doo Shik has just stepped out of prison and tried to take advantage of his blind brother. But when they return to live together in one house, the two then undergo a strong brotherhood relationship and realize what family really means.

My Brilliant Life revolves around the relationship between Dae-soo and Mi-ra. They were seventeen when Mi-ra is pregnant. Their son Ah-reum was diagnosed with a genetic disorder of progeria that made him age faster than normal people. A few years later, Ah-reum was sixteen but his body looked like an eighty-year-old grandfather. Ah-reum then wrote a story of how his parents fell in love when they were young. The movie starred Song Hye Kyo, Kang Dong Won, and Jo Sung Mok.