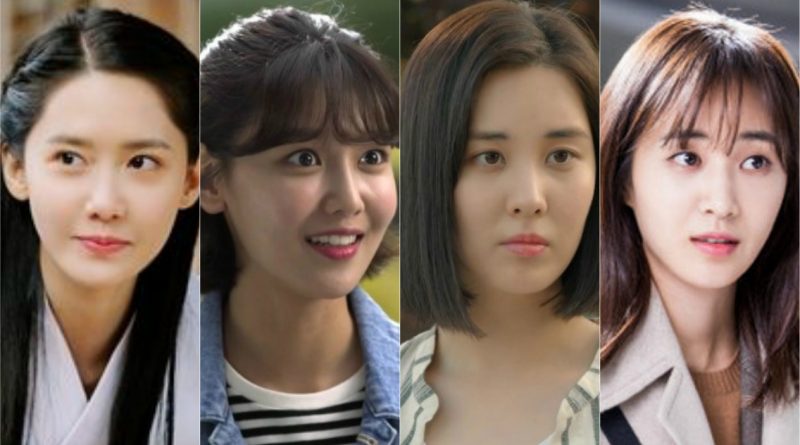 Girl group SNSD debuted 10 years ago. They show their ability in group activities as well as individual activities. In particular, Yoona, Sooyoung, Seohyun and Yuri are the members of SNSD working as an actress and make a remarkable acting development.

Yoona has the most experience in acting among the other members of SNSD, and currently she is preparing for her next work after completing MBC drama ‘King Loves’. Yoona has received a lot of love from viewers thanks to her acting as Eun San in the drama ‘King Loves’ which tells a triangle love story between 2 men and 1 woman. Yoona became the main character in the mini series and explored her emotional acting skills and enhanced her acting skills as an actress.

Yoona also shows her charm as an actress in popular dramas like ‘Cinderella Man’, ‘Love Rain’, ‘Prime Minister & I’, ‘The K2’ and more.

Sooyoung also shows her ability as an actress. Sooyoung’s skills have been proven by acting in a melo drama ‘The Spring Day of My Life’ with Kam Woo Sung in 2014.

Sooyoung played a new character in the drama ‘Squad 38’ last year and presented a stable performance in MBC’s weekend drama ‘Man Who Sets the Table’.

The youngest member, Seohyun also follows in the footsteps of other members as an actress. Seohyun started her acting career in 2013 in the drama ‘Moon Lovers: Scarlet Heart Ryeo’. Since then, Seohyun has appeared in the weekend drama with 50 episodes of ‘Bad Thief, Good Thief’.

Another SNSD member who becomes an actress is Yuri. Yuri acted in the movie ‘No Breathing’ in 2013, and acted as a lawyer in the newly aired drama SBS ‘Defendant’.

Girls’ Generation’s performing as actresses has become increasingly visible, so note how they will show their acting skills in the future.