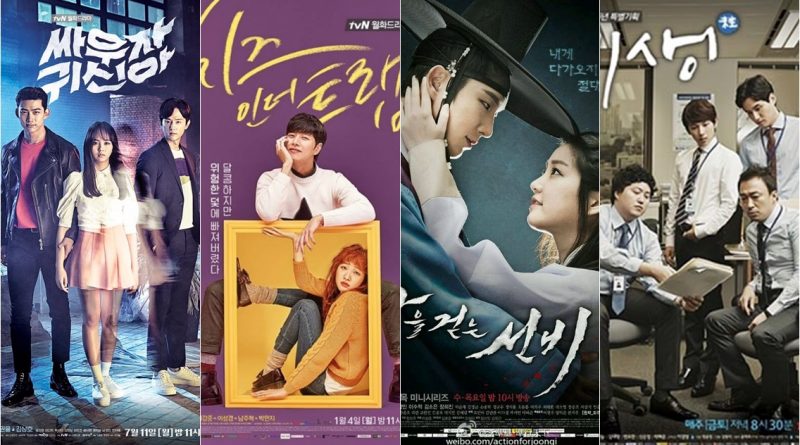 The inspiration for a story of dramas might come from anywhere. Currently, the Korean webtoon is growing rapidly not only domestically but also abroad. Many stories in the webtoon are interesting and becoming popular. Then, the story is adapted into another form which is a drama series. Just like the original work, the drama is lifted from webtoon also get the spotlight among webtoon readers and drama lovers. That’s because actors and directors work together to visualize what’s on the minds of their readers. Here is a list of famous dramas coming from webtoon.

The Korean drama is released on July 11th, 2016. ‘Let’s Fight Ghost’ is a fantasy, comedy, and romantic drama consisting of 16 episodes and broadcasted on tvN. Starring Taecyeon, Kim So Hyun and Kwon Yool, this drama tells of a life human, ghosts an also exorcists living in an apartment together. Adapted from webtoon with the same title, there is a 17-year-old girl who has the ability to see and hear ghosts. Hyun Ji (Kim So Hyun) has studied for 19 years and died in an accident and became a ghost. As a supernatural figure, she has traveled the world for the last few years. Then she met an exorcist named Park Bong Pal (Taecyeon) who listens to various stories of ghosts. The story with this unique theme along with the presence of Kim So Hyun as a beautiful ghost deserves to be watched.

This drama is an adaptation of webtoon of the same title that was serialized by Naver in 2010. The character played by Park Hae Jin is Yoo Jung, a senior who is very popular among women. The story depicts students’ lives exposed to reality. Talking about the romance of a student named Hong Seol (Kim Go Eun) and her senior on campus Yoo Jung (Park Hae Jin). Due to family background, Hong Seol had to work part-time. While Yoo Jung is a rich man’s son who is handsome, smart, and has a good personality. But Hong Seol realizes there is another side of Yoo Jung that is creepy. Once, Hong Seol’s life on campus became like in hell when she was dealing with senior Yoo Jung. Later, Yoo Jung began to feel interested in Hong Seol and turned 180 degrees. From often bothering her, he transformed into a sweet figure. Seo Kang Joon who became a rival in the love of Park Hae Jin plays as Baek In Ho. In addition, Lee Sung Kyung and Nam Joo Hyuk also starred in this drama.

The drama was released on July 8th, 2015 with historical, fantasy, and romantic genres. It starred Lee Joon Ki as Kim Sung Yeol, Lee Yoo Bi as Jo Yang Sun, Shim Chang Min as the crown prince Lee Yun, Kim So Eun as Choi Hye Ryung, and Lee Soo Hyuk as vampire Gwi. Adopted from a webtoon with the same title and created by Jo Joo Hee and Han Seung Hee, it first aired on January 25th. It tells the story of people from the Joseon dynasty, a woman named Jo Yang Sun (Lee Yoo Bi) who is a noble princess but lost everything when her father was accused betraying the king and was exiled. To fulfill everyday life, Yang Sun began to work as a bookseller and disguised as a boy. Later, she met a mysterious but handsome scholar named Kim Sung Yeol (Lee Joon Ki).

‘Misaeng: Incomplete Life’ is one of the dramas that takes the theme of working life. Through this drama, we can witness the work competition in Korea which is quite depressing. It tells the story of Jang Geu Rae (Im Siwan) who is a former badger player but failed to reach a professional stage. Eventually he had to give up his dream to become a badger player and start entering the real world. Since Jang Geu Rae is just a high school graduate and got accepted as an intern at the company because of a connection, he is often underestimated by his co-workers. He is considered less competent and will not be accepted as a permanent employee. However, his efforts were able to attract the attention of the directors and he was selected as one of the contract employees among the many apprentices. Not only was there Jang Geu Rae’s misery, the various problems faced by his division and alienated by his leadership made Jang Geu Rae constantly trying to prove his worth. ‘Misaeng’ also starring Lee Sung Min, Kang So Ra, and Kang Haneul.

February 28, 2017 Tri Comments Off on Gong Yoo to Hold A Fundraising Bazaar With Fans
MUSIC VIDEO

August 29, 2017 Ria Comments Off on Great Actors Are Lining-Up For The Movie ‘Fortress’