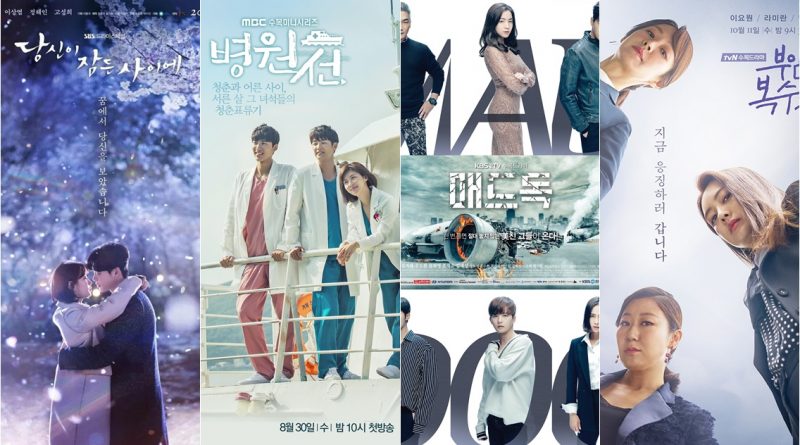 Starting from ‘Hospital Ship’ and ‘While You Were Sleeping’ then ‘Mad Dog’ and ‘Buamdong Revengers’ are anticipated to be great works and receive high viewer ratings.

On the 11th,  new Wednesday-Thursday dramas KBS2’s ‘Mad Dog’ and tvN’s ‘Avengers Social Club’ aired its first episode. Previously, MBC drama ‘Hospital Ship’ and SBS ‘While You Were Sleeping’ had already aired, the two competing against each other for the first position of viewer ratings.

‘Hospital Ship’ is a medical drama that tells the story of a doctor becoming a true doctor doing medical treatment on a ship that can only do simple maintenance, and communicate with the inhabitants of the island. Since its premiere, the audience is interested in the story around Song Eun Jae (Ha Ji Won). Currently, the appearance of her family, Song Jae Joon (Cho Sung Ha) and Choi Young Eun (Wang Ji Won) make the story more exciting.

SBS ‘While You Were Sleeping’ Which Currently Ranked 1st

Starring hallyu stars Lee Jong Suk and Bae Suzy, as well as written by Park Hye Ryun make the drama ‘While You Were Sleeping’ a subject of conversation and awaited by viewers. This drama feels like a film with a strong story and continues to get good reviews every day thanks to its great story and acting of the actors. Starting with a 7% rating and up 8%, this drama successfully defeated ‘Hospital Ship’ in position 1. Plus, the love story of Jung Jae Chan (Lee Jong Suk) and Nam Hong Joo (Bae Suzy) who can see the future through dreams, is expected to become more beautiful in the future. ‘While You Were Sleeping’ attracts attention because of the combination of romance in the midst of various cases.

On the 11th, the drama ‘Mad Dog’ premiered. This drama is an insurance crime drama that reveals the reality in South Korea’s insurance industry. Starring trusted actor Yoo Ji Tae, Woo Do Hwan who is on the rise thanks to his acting in the drama OCN ‘Save Me’ and KBS2 ‘My Father is Strange’, as well as Ryu Hwa Young.

The drama ‘Avengers Social Club’ is the same as ‘Mad Dog’, premiered on the 11th. Telling about the real revenge of chaebol princess, fisherman, and wife of professor. From the title alone, we can guess the plot is centered on retaliation. ‘Avengers Social Club’ is also a change of tvN drama schedule that will deal with terrestrial drama after Chuseok holidays. There is much hope that this drama will also survive in the midst of fierce competition.