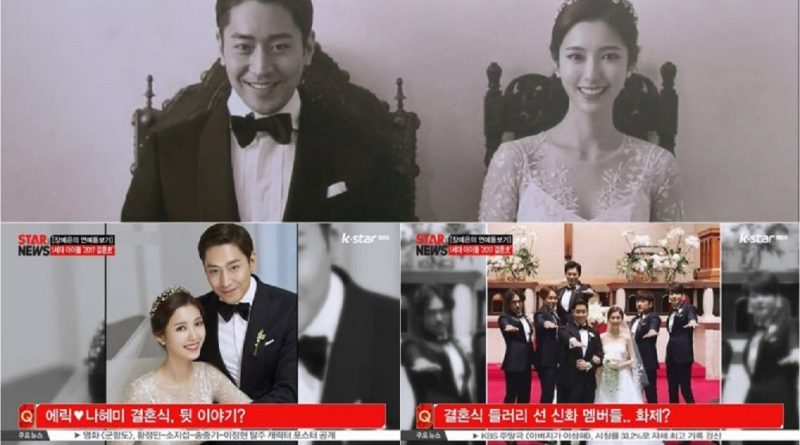 This year, there are many news about first generation idol members’ weddings.

On April, actress Na Hye Mi and Eric announced their marriage which was held on July 1st at 15.30 at a church in Seoul. They held a private wedding with only family and close relatives in attendance. Shinhwa members, ‘Oh Hae Young’ and ‘Three Meals A Day’ stars attended the event. Lee Seo Jin, Yoon Kyu Sang, Ye Ji Won, Kim Ki Doo, Heo Jing Min, Charlie Park and many entertainment hosts were there to give them congratulations.

On the wedding day, many wedding photos were spread over SNS. The photo when Eric fixes Na Hye Mi’s wedding dress became a topic of conversation. After Eric and Na Jye Mi walked together, he stared at his bride Na Hye Mi with sparkling eyes. Eric expresses his gratitude to those who pray for his new life.

Shinhwa came as a groomsman to celebrate their leader’s wedding, Eric. On their SNS, they uploaded a photo with caption “We are Shinhwa. On Eric’s wedding day, from Shinhwa, first generation idol. The handsome groom and the cool bridesmaid.” In the photo, Eric uses tuxedo while Na Hye Mi uses a beautiful wedding dress. Then behind them is Kim Dong Wan, Andy, Jun Jin, Lee Min Woo and Sin Hye Sung posing. Eric became the first person to marry among the members.

Last May, Fink.L Sung Yoo Ri married golf athlete Ahn Sung Hyu quietly. Earlier in March, girl group S.E.S Bada received congratulations on her marriage to a businessman whose age is 9 years younger. The couple had been dating for 1 year before deciding to get married. Back in February, Moon Hee Joon H.O.T was married to So Yool, member ‘Crayon Pop’ whose age is 13 years younger.

The first Idol generation idol that took control over the music industry of the 90s! Although they are old enough, they are still an idol for their fans. Hopefully after marriage they are still loved and supported by fans.