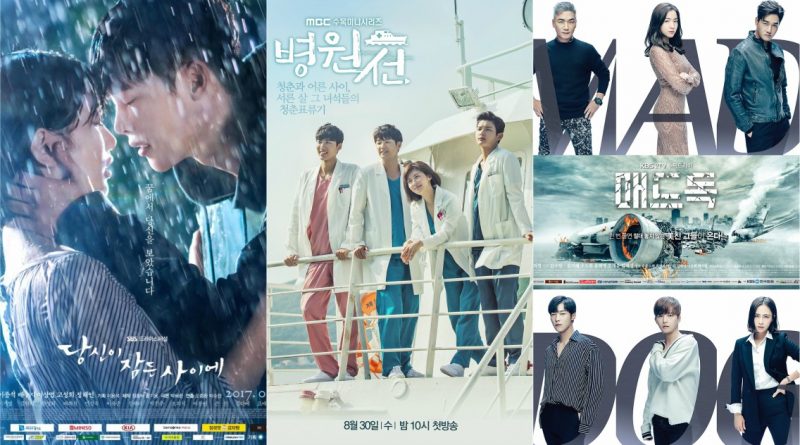 Viewers get full-entertainment through Wednesday-Thursday dramas on every television station that has different genres and high quality.

According to Nielsen Korea, for the first episode of MBC’s Wednesday-Thursday drama ‘Hospital Ship’ earned an 8.5% rating, the second got a rating of 10.0% and made it the first rank at that time.

KBS Wednesday-Thursday drama ‘Mad Dog’ received praise for its film-like qualit and earned a 4.8% rating. In the episode one, it managed to get a rating of 5.5%, but in episode 2 the rating fell by 0.7%.

Wednesday-Thursday dramas competition has attracted the attention of the audience more than other drama competition. Not only the viewer ratings, this competition will go on strictly between the famous drama ‘While You Were Sleeping’, the drama first-ranked drama ‘Hospital Ship’, and a strong newcomer ‘Mad Dog’.

Drama ‘Hospital Ship’ with unique medical theme managed to get a high audience rating because the story can be enjoyed by people of all ages. Meanwhile, the drama ‘While You Were Sleeping’ has difficulty reaching out to the parents, regardless of the popularity of the drama. Although the complicated story of a dream come true, and adorned with fantasy easily gained interest from the young, it is difficult to attract the attention of audiences from the 40s to 50s.

The competition between Wednesday-Thursday dramas that have various themes will continue. In addition, the slight rating difference makes the ranking in this drama competition unpredictable and can change at any time. This makes the competition more interesting.

April 4, 2017 Tri Comments Off on The Main Point to Watch ‘Whisper’
MUSIC VIDEO