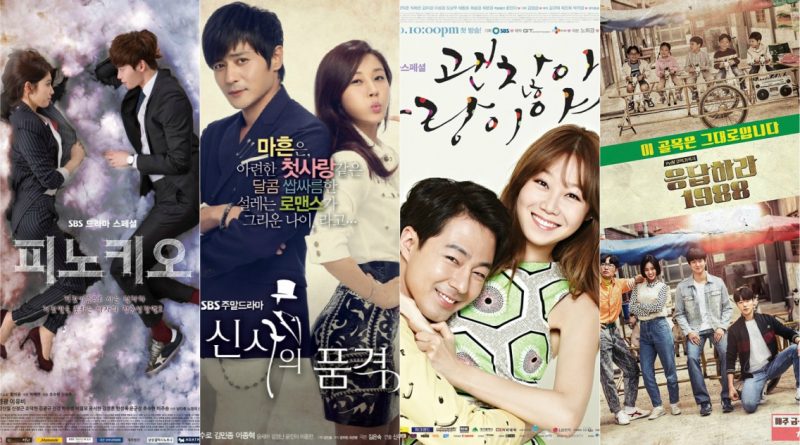 The drama aired in 2014 on the SBS channel. Starring top stars, Lee Jong Suk, Park Shin Hye, Yoon Kyun Sang, Kim Young Kwang, and many more. This drama themed love, family, and dreams. ‘Pinocchio’ tells the story of journalists at a broadcasting company who are looking for facts to reveal cases. Choi Dal Po (Lee Jong Suk) became a journalist to reveal the truth of his family’s case in childhood. Choi In Ha (Park Shin Hye) becomes a journalist following in the footsteps of her mother, but she has the ‘pinocchio’ syndrome, that is, if she lies it will hiccup hard. Lee Jong Suk plays the role of Choi Dal Po whose real name is Ki Ha Myeong. A very intelligent child from childhood but in order to cover his true identity, he prefers to pretend stupid and look innocent. While Park Shin Hye role as Choi In Ha who uphold the sense of justice and never give up.

The drama ‘Gentleman’s Dignity’ is one of the other successful works of Author Kim Eun Sook. Lifting the comedy-romantic theme, this drama will air in 2012 on the SBS channel. ‘Gentleman’s Dignity’ focuses on the story of four friends who have aged 40s, namely Kim Do Jin (Jang Dong Gun), Im Tae San (Kim Su Ro), Choi Yoon (Kim Min Jong), and Lee Jung Rok (Lee Jong Hyuk). They have been friends for over 20 years. One day, it appears Collin (Lee Jong Hyun) who is looking for his biological father, which is among the four of them. It turns out Collin’s real dad is Kim Do Jin and finally they live together. In the love story, the four of them have a unique love story and different. Kim Do Jin falls in love with Collin’s teacher, Seo Yi Soo (Kim Ha Neul). Originally Seo Yi Soo liked Im Tae San, but her friend, Hong Se Ra (Yoon Se Ah) got it. After Kim Do Jin and Seo Yi Soo love each other, the problem arises after knowing that Kim Do Jin has had a child from his first love.

The drama ‘It’s Okay, It’s Love’ starring handsome actor Jo In Sung and all-round actress Gong Hyo Jin is airing on SBS channel in 2014. ‘It’s Okay It’s Love’ tells of a love affair between a famous and handsome novel writer named Jang Jae Yeol (Jo In Sung). Due to an illness, Jang Jae Yeol can only fall asleep in the bathtub. Then he meets a psychiatrist named Ji Hae Soo (Gong Hyo Jin) on a television show when the two are present as guest stars. Although the two often fight, the longer they like each other. The love affair begins to intertwine, and it is known that Jang Jae Yeol has a mental illness that makes him hallucinate about Han Kang Woo (Do Kyung Soo) a high school student who claims to be a big fan. Ji Hae Soo tries to heal Jang Jae Yeol and heals herself from an inner wound. The presence of Do Kyung Soo and Lee Gwang Soo became fresh seasoning in this drama. Especially the very convincing acting EXO personnel, Do Kyung Soo, reap a lot of praise and steal the public’s attention. This drama is perfect to be enjoyed for Korean drama enthusiasts.

TVN drama that aired in 2015 is starring Lee Hye Ri, Park Bo Gum, Go Kyung Pyo, Ryu Jun Yeol and Lee Dong Hwi. The drama is about the friendship of five families living in Dobong District, North Seoul. In the Year 1988, Duk Sun (Hye Ri), Jung Hwan (Ryu Jun Yeol), Sun Woo (Go Kyung Pyo), Dong Ryong (Lee Dong Hwi) are 5 friends who have known since childhood. They grow up together and their families are very close to each other. Reply 1988 is very liked by the audience because the story is considered interesting. Drama Reply 1988 not only presents romance stories only, but also family stories, sad stories and some scenes that make the audience laugh out loud. With an episode number of 20 episodes, Reply 1988 won an 18.8% rating on the last episode.