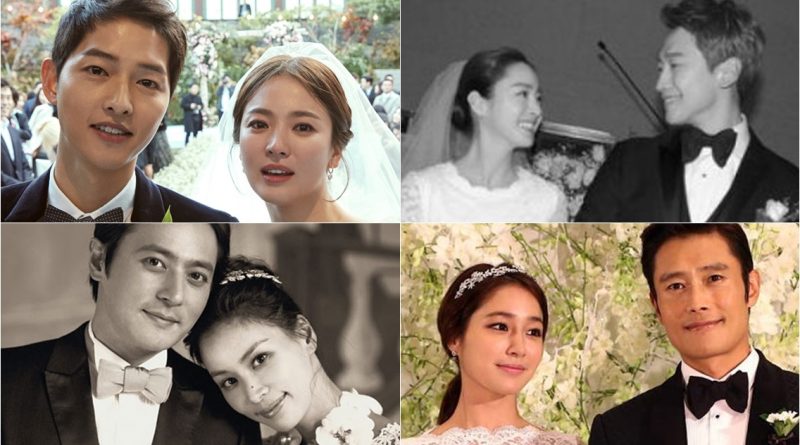 In the first place, none other than the greatest couple in 2017, Song Joong Ki and Song Hye Kyo. The popularity of the two new stars married on October 31, not only in Korea but also outside Asia. Both are often hit by dating rumors but always declare the relationship is only limited junior and senior close. Public suspicion grew even though the two sides of the agency declared circumvention. Song Joong Ki and Song Hye Kyo are so loved by the public thanks to the popular and widely discussed ‘Descendants of the Sun’ drama. Finally on July 5, it was not a dating confirmation expressed by each agency but a marriage announcement. Suddenly the response gained to the news all sorts. Almost all fans support the relationship of both Hallyu stars and pray for them.

In contrast to Song Joong Ki and Song Hye Kyo, Rain and Kim Tae Hee has been in a relationship long enough. Even these two couples are often reportedly married in secret. But eventually the rumors came to light after Rain and Kim Tae Hee married officially on January 19 this year. With a simple marriage, closed and attended only by close relatives and family, both are now living their lives as a married couple. Even in October of this year, Rain and Kim Tae Hee have been blessed with a beautiful princess. Rain posted a photograph of a pair of white baby shoes equipped with pink flowers. He wrote the caption, “Thank you. My beautiful little daughter. We will raise he and make he a useful child.”

Lee Byung Hun’s name has gone all the way to Hollywood. But who would have thought, exactly on Lee Min Jung is his heart boils down to. Despite the considerable age difference, it does not deter the romance of Lee Byung Hun and Lee Min Jung. The two first met in 2006, when Lee Min Jung just plunged into the Korean cinema industry. Min Jung’s sweet and friendly character makes Lee Byung Hun unnerved and in love. Both had knit love and parted because of busy each. But in 2012 his love re-blossomed. Lee Byung Hun and Lee Min Jung claimed to have another romance after Lee Byung Hun was spotted coming out of the house of Min Jung. The marriage of two top South Korean celebrities was also rumored to be one of the grandest wedding events, as nearly 900 invitations were present, mostly from celebrities. Many people rate them as Korea’s ideal partner.