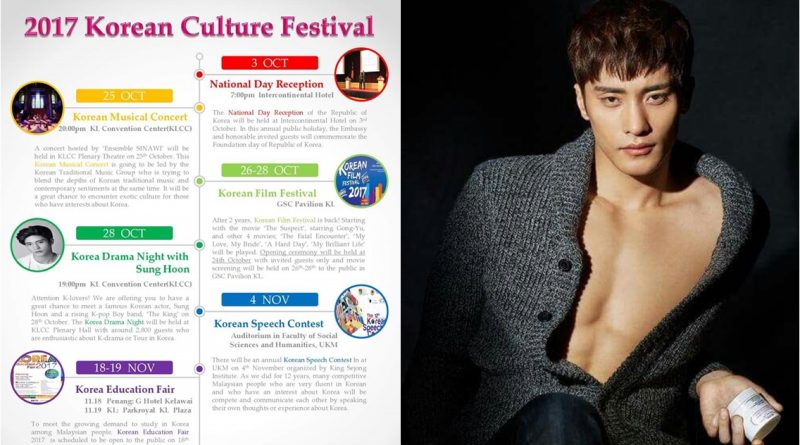 Sung Hoon is a South Korean actor who is quite popular thanks to his role in drama ‘My Secret Romance’ alongside Song Ji Eun. In addition to being an actor, he has also been a member of the national swimming team in the butterfly style category. Sung Hoon swam for the national team for 14 years and decided to quit due to a spinal cord injury. He debuted as an actor in 2011 in the drama ‘New Tales of Gisaeng’ as the main character. After a successful acting career, Sung Hoon expanded his wings in music. He does DJ activity with the name ROI. In June 2015, Sung Hoon showed off his DJ skills in Suzhou Jiangsu Province, China. Then he has also appeared as a DJ in Hong Kong, Thailand, Malaysia, Singapore, and Indonesia.

His popularity began in 2015 when he played Lee Kang Hoon, a wealthy businessman who becomes CEO for South Korea’s D.O.L in the drama ‘Noble My Love’. One day, Kang Hoon was kidnapped and managed to escape dramatically from the bad guy. Unfortunately, he was injured quite badly and had to perform surgery. Then he met a veterinarian named Yeon Seo. Because the situation is so severe, there is no other choice for Kang Hoon than to receive treatment from a veterinarian in a veterinary hospital.

Sung Hoong’s uccess in ‘Noble, My Love’ brought him to the next project. He has starred in drama ‘Oh My Venus’ in 2016 which also starring Shin Min Ah and So Ji Sub. Although not playing as the main character, but his presence cannot be forgotten. Sung Hoon plays Jang Joon Sung who is a friend of Kim Young Ho (So Ji Sub). Jang Joon Sung is trained by Kim Young Ho or also known as John Kim, as a boxer. Jang Joon Sung is an orphan, and John Kim picks him up as a disciple, trains him, and helps Jang Joon Sung achieve his success. Until finally, Jang Joon Sung was dubbed as the ‘Korean Snake’. In this drama, we can see his muscular body.

‘Secret Romance’ is his first romantic comedy drama. Sung Hoon plays Cha Jin Wook who is the son of a conglomerate family. His family runs a big company. While Cha Jin Wook seeks to pursue his love,  he meets Lee Yoo Mi (Song Ji Eun) who has never been in romantic relationship. This drama aired in 2017 at OCN for 16 episodes. In addition, Sung Hoon has also co-acted with Kim Jae Young, Jung Da Sol, and Nam Ki Ae.