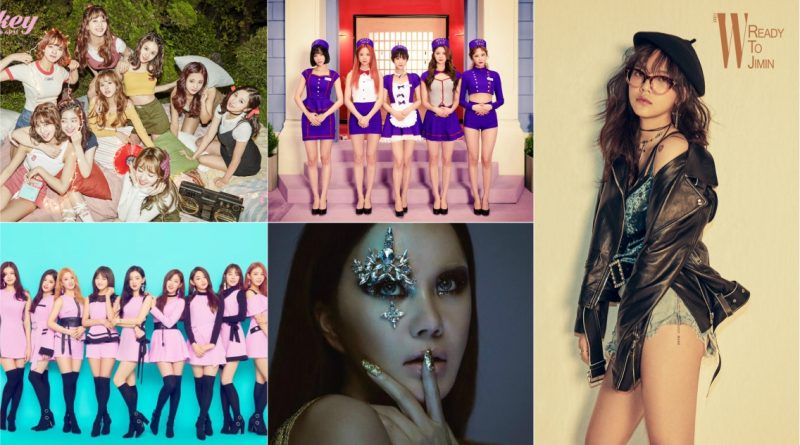 The wind will be blowing hard in November. Starting from the ‘Nation Girl Group’ TWICE to Performance Queen ‘Uhm Jung Hwa’s will adorn the music industry in the winter of 2017.

EXID will release their 4th mini-album on November 7th with the main song titled ‘Heartbeat’. Seolji the main vocal will actively participate in the recording of this album, after from December last year she did not promote with the group because of illness.

Former ‘Produce 101’ member Kim Sejong, Kang Mina and Kim Nayeong who are now joining the group GUGUDAN will be making their comeback with their first single on November 8th. Unfortunately, Soyee will not participate in this album. Soyee suffered an injury to her shoulder after making her debut.

Before EXID and GUGUDAN, TWICE will also make a comeback with their first album (Twicetagram) which will be released on various music sites on October 30th at 6 pm. TWICE has released a group photo that features a young impression, and draws the curiosity of the fans with the different concepts and charms they show. According to the list of songs that have been released on October 21st, TWICE’s first full album contains 13 songs.

AOA’s Jimin will release her solo album after 1 year 8 months. Her new song ‘Hallelujah’ is a Latin pop dance song released on October 26th. Fans can hear Jimin’s vocal ability that has never been shown before.

‘Performance Queen’ Uhm Jung Hwa announced her comeback in November. On Uhm Jung Hwa has been in the final stages of her comeback preparations in November by filming a music video on October 20th. The song she performed with Lee Hyo Ri last year is expected to be included in the track list on this album.