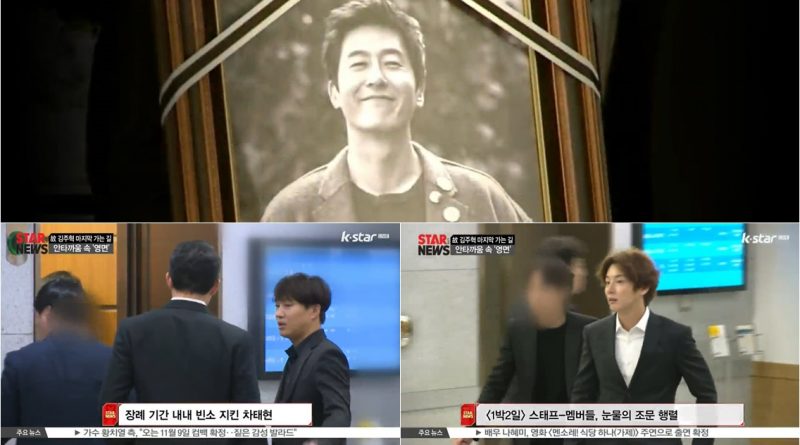 Kim Joo Hyuk’s funeral was held today (November 2nd). Tears of co-workers, junior and senior who love him flow. That day, family, relatives, juniors, seniors, and co-workers from the entertainment world are present. With tears in their eyes, they let go of the Actor to his final resting place. Lee Yoo Young who has always been by the late Kim Joo Hyuk’s side until his body was buried, followed the procession with a grieving family. Yoo Young bowed her head and stood up front, sobbing heavily, making the mood even more sad.

Son Hyun Joo, Choi Min Sik, Song Kang Ho, and Lee Kyung Young came to the funeral. Jo Jin Woon who collided acting in the movie ‘Dokjeon’ was present. Jung Woo and Jung Jin Young came in and looked sad. Hyun Bin and Yoona who won the first and final award with Kim Joo Hyuk through the movie ‘Confidential Assignment’ together came to the last place of the deceased. Jang Geun Suk, Kwon Sang Woo, and Yoo Joon Sang who collided acting in the drama ‘Lovers in Prague’ and the other stars also came.

Actor and actress who collided acting with the deceased in a work also came to the funeral house. Son Ye Jin who has twice worked with the deceased, and Han Hyo Joo who competed acting in ‘Beauty Inside’, and Lee Mi Yeon in ‘Reply 1988’, then Kim Go Eun, Han Ji Min, Yoo Sun and a number of other artists came with a sad facial expression and could not hide their tears.

A number of artists continued to arrive non-stop to show their condolences. Newlywed Song Joong Ki also came to the funeral to pay his last respects to the late Kim Joo Hyuk. Song Joong Ki was on Cha Tae Hyun’s side and calmed him down. Jisung, his old friend who was under the same agency appeared in the funeral home. Jeon Do Yeon who collided acting with the deceased in ‘Lovers in Prague’ could not hide his sadness. Yoo Joon Sang,a college friend, and artist under the same agency, Jung Sang Ho who plays in ‘Heung Bo’ came to the funeral.

Song Yoon Ah came with a depressed facial expression, Choi Ji Woo and Lee Som who competed acting in ‘Like for Likes’ came with a heavy expression. Artists who were under the same agency as well as old friends, Yoo Ji Tae and Kim Hyo Jin looked gloomy. Lee Jong Hyun who first won the movie award with Kim Joo Hyuk was grieving and he came to the funeral house. Parting is a hard thing to do, to commemorate the late Kim Joo Hyuk many celebrities came to to pay their last respects. May he rest in peace.

March 1, 2018 Ria Comments Off on 6 Korean Artists With The Most Followers on Instagram
DRAMA Rank&Talk