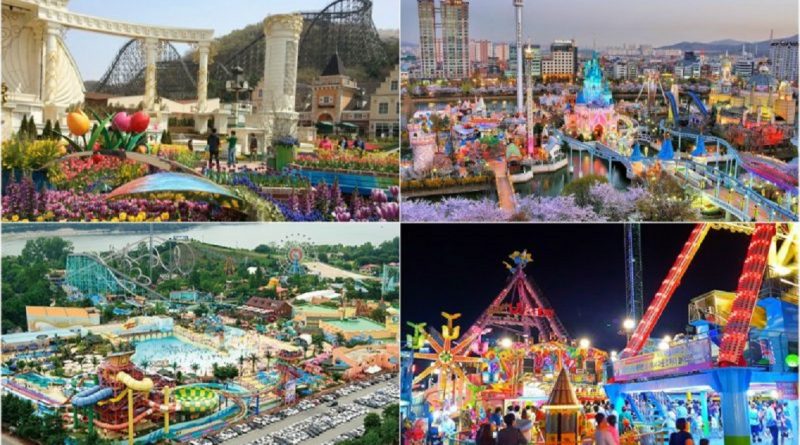 To those of you who like to go to amusement parks, Castko will present a list of Best Amusement Parks in Korea!

Everland is the largest amusement park in South Korea. Located at Everland Resort in Yongin, a city in Gyeonggi-do, it receives 7.3 million visitors annually and is ranked sixteenth best amusement park in the world in 2014. Along with its main attractions, Everland includes a zoo and park water known as Caribbean Bay. Everland is operated by Samsung C & T Corporation (formerly known as Samsung Everland, Cheil Industries), which is a subsidiary of Samsung Group.

Gyeongju World Amusement is the largest playground in the south. The most famous facilities in this park is X-Zone, which features exciting sensation rides including Phyton roller coasters, Mega Drop, Tornado, Grand Canyon, King Viking, and Submarine Splash. People who do not enjoy roller coasters will still have fun in the park at the Wizard Garden (kids zone), California Beach (summer only), and large-scale sled sites (winter only). Various rides, a variety of convenient amenities, and restaurants will cater to the tastes of every visitor.

Wolmi Theme Park is a popular theme park complex located on Wolmido Island. It was formerly known as My Land, which first opened in September, 1992. The place was renovated and reopened as a 13,223m2 park playground in August 2009 under a new name, Wolmi Theme Park. The park has various rides, such as 70-meter Hyper Shoot Drop, Tagada Disco, Viking Ship, 115-meter-high Ferris Wheel, and other thrilling attractions. In addition, the park also has a large indoor children’s playground that includes water activities facilities such as mini flume rides, water boats, and water ball, as well as 4D spaces. All of these features make this complex perfect for all visitors for centuries.

August 22, 2017 Tri Comments Off on Max Changmin and Choi Siwon Return From the Military
MUSIC VIDEO