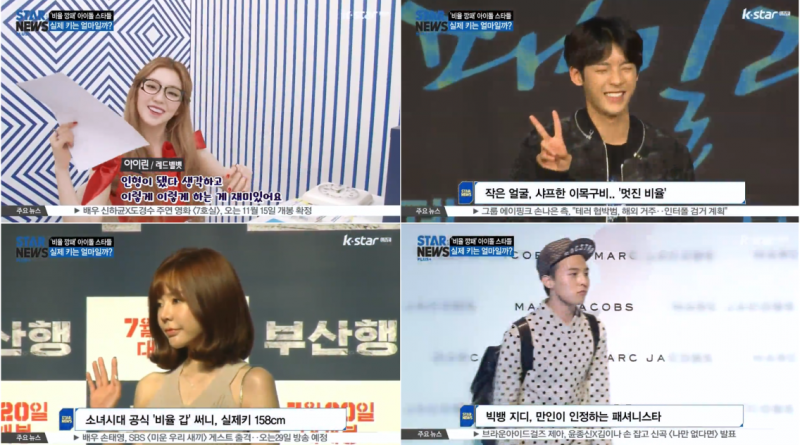 Idol stars who have perfect ratio despite being short have attracted attention. Although they are known to be short in the entertainment industry, they are much loved by netizens. Red Velvet Irene, a little girl who does not seem to be small even though she goes to the stage wearing loafer shoes to main the same pace with others. She is the best female idol to show the ratio of the goddess despite her small height of 157cm. From the same group, Red Velvet Seulgi exhibits a 7: 3 proportion with long legs and superior visuals. Then Lee Minhyuk, who captivates women with a warm boyfriend look! His physical height is 173cm he has a good and solid body as a result of often doing a physical workout.

Next, Baekhyun is the best member who is suitable for any outfit, even he looks like 180! but his height is actually 174cm! He has longer legs and wider shoulders than tall and thin body, and even better. ‘Small but Perfect Proportion’ Official Scale Member SNSD Sunny! Her actual height is 158cm! However, she is considered the queen of ratio and boasts her slim figure. Sunny has impressed the public with her appearance. Among the members of SNSD, Taeyeon who is a ‘short member’ with a height similar to Sunny is also the owner of a perfect ratio!

Hyuna the singer of ‘Bubble pop’, kicking high heels, barefoot dancing to show off her first stage performance, also collecting big topics! At the same time, with tan skin and flexible hip moves while dancing, make her get the title of “sexy queen’. Despite her small height, she is one of the famous idol stars with the perfect proportions like models and Barbie dolls. 2 AOA members used to be called ‘Little Baby Lines’, Jimin and Mina! The height of two people is equal to 160cm in the profile, but the actual height is 158cm.

G-Dragon, representative of fashionista in the music industry! He is a fashionista that everyone recognizes.G-Dragon has a good reputation even for the overseas brand with sponsorship. The true height of G-Dragon is unclear and he is often said to be a model, but in fact, he is not as tall as an ordinary fashion model. Even so, he is slaying the models! Because he has a small face, long legs, broad shoulders and so on which is a perfect proportion. He has a good proportion. He is considered the best fashionista with height less than 180cm. Idols with amazing proportions despite having small height! Their height does not seem to be important because they have perfect proportion which makes them special.