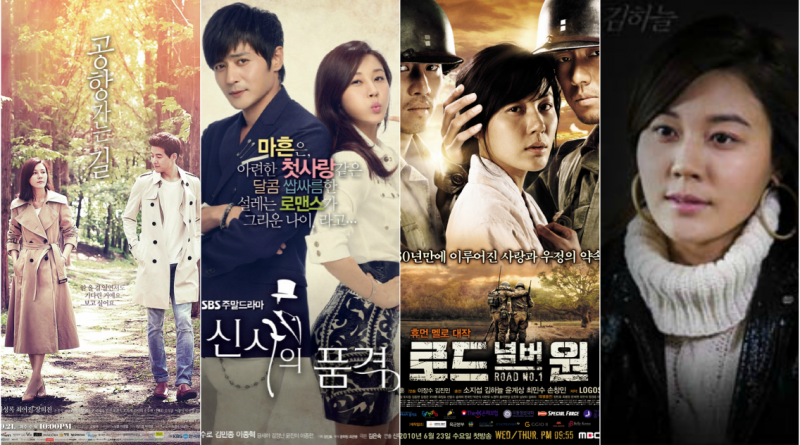 On the Way to the Airport is a 2016 South Korean television series starring Kim Ha Neul, Lee Sang Yoon, Shin Sung Rok, Jang Hee Jin, and Choi Yeo Jin. It tells about married individuals who are brought together by fate and become more involved in life with each other. Choi Soo Ah (Kim Ha Neul) works as a purser assistant at an airline company. She has worked there for 12 years. Her husband is a pilot and they have a 12 year old daughter. Choi Soo Ah thinks she is satisfied with her life, but she meets up with Seo Do Woo (Lee Sang Yoon). Her life changed. Seo Do Woo works as a part-time instructor in architecture. He has a warm and kind heart. He is married and has a daughter, but a surprising incident occurred. Because of this, he gets confused as Choi Soo Ah comes into his life.

The story is very light, about how the lives of middle-aged men who are handsome, rich and powerful handling with their love life. Kim Do Jin (Jang Dong Gun) who suddenly fell in love with Seo Yi Soo (Kim Ha Neul), a woman very different from many beautiful women who once became his woman. The complicated relationship between Jeong Rook and his arrogant and stubborn wife, Choi Yoon (Kim Min Jong) and Im Mea Ri (Yoon Jin Yi) which are full of dilemmas. It also features a mysterious teenager from America who somehow has a photo of the four companions. He looks for Lee Jung Rok (Lee Jong Hyuk) for a reason.

The drama revolves around the Korean War around the 50s (also in commemoration of the 60th anniversary of the Korean war). Road No.1 is a drama about the military cadets who must participate in the sudden erupting war and must fight to survive with their enemies. The title of Road no.1 comes from the name of national road No.1 which was used as the main street in 1950 during the Korean War rupture. This road extends from North to Seoul and from South to Pyeongyang. In the drama, this path is also a symbol that means the hero meets the troops he defeated and fought for victory. In addition to Kim Ha Neul, the drama also starred Seo Ji Sub, Choi Min Soo, and Yoon Gye Sang.

Jang Ki Joon (Lee Beom Soo) used to be the top manager in this business but he went bankrupt because he could not compete with other powerful agents. He was ‘saved’ by Oh Seung Ah (Kim Ha Neul), the top star who agreed to join his agency after breaking up with his ex-wife. Lee Kyung Min (Park Yong Ha) is a drama PD who got a chance to become a director. Seo Young Eun (Song Yoon Ah) is a highly sought after scriptwriter who has divorced and has young children. On Air revolves around the four entertainment industry figures – a director, writer, actress, and manager – as their personal and professional lives intertwine during the shooting of a drama. It also illustrates how the entire production team and players completed a project in a tight schedule and how actors, actresses, and entertainment agents handle rumors around them.