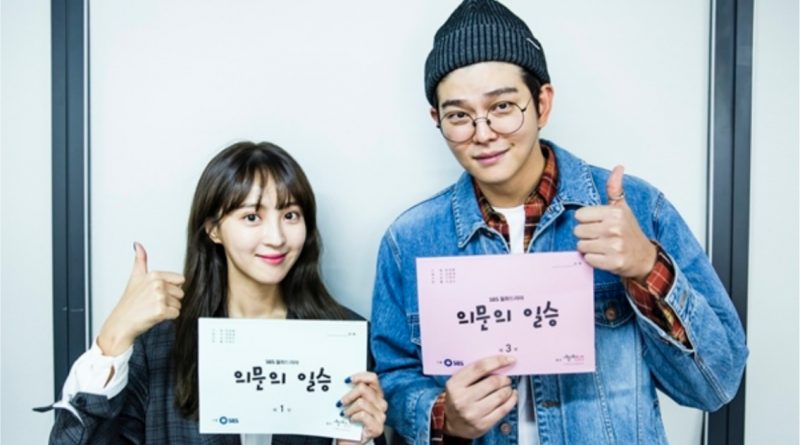 Drama ‘Doubtful Victory’ tells about the life of a fake detective named Oh Il Seung (Yoon Gyun Sang). This is a story about a man who was accused of murder and put to death and then somehow got out of jail and became a fake detective Oh Il Seung. The drama is a collaboration of writers Shin Kyung Soo from ‘Three Days’, ‘Six Flying Dragons’ and Lee Hyun Soo from ‘School 2013’, ‘Pride and Prejudice’, allowing the powerful production team to capture the attention of the audience.

In the script reading, it can be seen all the actors completely immersed in the characters they play and focus on reading the script. Yoon Gyun Sang who acts as Oh Il Seung receives the death penalty and gets out of jail, and he becomes a fake detective and managed to attract attention with his charm. Yoon Gyun Sang’s charm that is sometimes serious and sometimes cute show his purity and makes the location exciting. Jung Hye Sung portrays Jin Jin Young character with her distinctive voice and keeps the audience looking forward to her never-before-seen transformation.

The appearances of top actors and actresses such as Jang Hyun Sung, Choi Won Young, Kim Hee Won, Yoon Yoo Sun make the drama highly anticipated. They are able to portray the characters very well and increase engagement in the location of the script reading.

Meanwhile the drama ‘Doubtful Victory’ will air on the 27th at 10 pm to replace the drama ‘Temperature of Love’.

March 30, 2018 Ria Comments Off on 5 Second Lead Actors Who Transformed Into The Main Leads In 2017
BEAUTY Rank&Talk