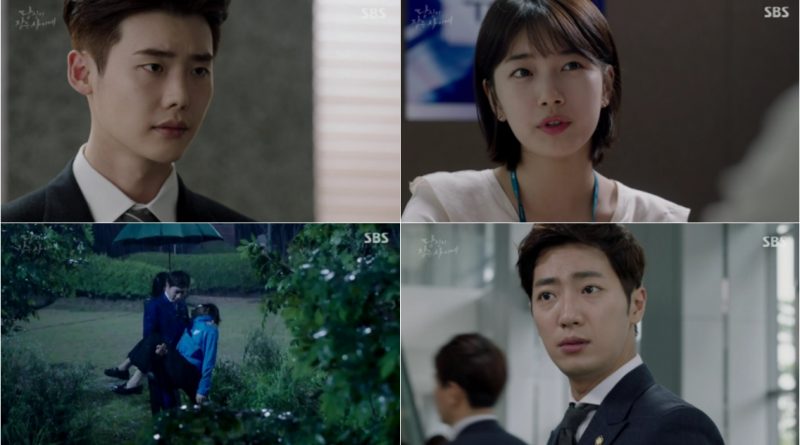 DRAMA
November 13, 2017 Ria K-DRAMA, While You Were Sleeping

On the 9th of Wednesday-Thursday drama SBS ‘While You Were Sleeping’ episodes 27 and 28, Nam Hong Joo (Bae Suzy) handled the ringer serial murder case and went through a crisis. Lee Yoo Bum (Lee Sang Yeob) found out the truth about the serial killings of ringer and tried to kill Nam Hong Joo using evidence.

Jung Jae Chan (Lee Jong Suk) was looking for a house of a friend who was accused as the killer, then Nam Hong Joo also entered the container. The door was locked and there was a fire. Choi Dam Dong (Kim Won Hae) dreamed about the two and came to save them by opening the locked padlock.

Jung Jae Chan who suspected this case apart from the murder of ringer believed that the case is separate and should be re-investigated. Nam Hong Joo also gathered her reporter team, she believed the case is not separate from serial killings. SBC also took the case separately.

Lee Yoo Bum felt burdened when he was contacted by the real killer. The perpetrator also asked for protection as before and threatened to say that Yoo Bum had manipulated the investigation and helped him back then. Finally Yoo Bum also accepted his offer.

Lee Yoo Bum knew there was someone who also knew about the case and asked the offender to handle the person, she is Nam Hong Joo. Nam Hong Joo had dreamed that she would be attacked by someone who was wearing a green umbrella in the rain.

Jung Jae Chan also knew that from his dream, he realized that the scene happened in Haekang Lawfirm and immediately asked for Han Woo Tak’s (Jung Hae In) help. Viewers are curious whether Jung Jae Chan and Han Woo can save Hong Joo.