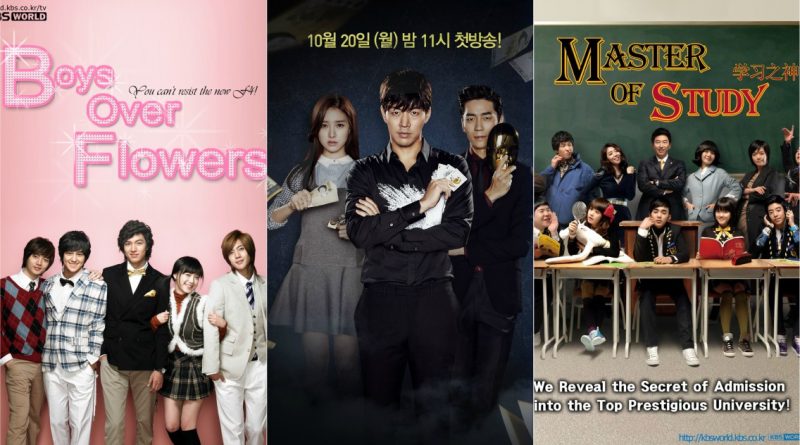 This popular drama is an adaptation of Yoko Kamio’s Japanese manga entitled ‘Hana Yori Dango’. In Japan, this series has first appeared in 1995 with the same title and played by Shosuke Tanihara and Yuki Uchida. Then Japan made this series back in 2005 starring Inoue Mao and Matsumoto Jun. Korea then did a remake of this popular work in 2009 played by Lee Min Ho and Goo Hye Sun. Korean version of ‘Boys Over Flower’ drama is very popular both inside and outside Korea.

The drama ‘God of Study’ aired in Japan in 2005 under the title ‘Dragon Zakura’ on TBS television. The drama is played by Hiroshi Abe, Tomohisa Yamashita, Masami Nagasawa, Teppei Koike and others. The drama was subsequently remaDE by Korea in 2010 on KBS and aired on January 4 to February 23 with a total of 16 episodes. The drama starred Kim Soo Ro, Yoo Seung Ho, Go Ah Sung, Lee Hyun Woo, and so forth. This drama has a very good moral message for students who will take the university entrance exam.

The drama is based on a manga with the same title Shinobu Kaitani’s first released in 2005. The work was subsequently drama by Japan in 2007 and stars Erika Toda and Shota Matsuda. Thanks to its popularity, this drama then made its second season in 2009 with the same cast. Korea made the remake of this drama in 2014 and broadcasted on tvN. The drama stars Lee Sang Yoon, Kim So Eun, Shin Sung Rok, and so on.

September 13, 2017 Ria Comments Off on Kim Tae Hee Is Expected To Give Birth On October
MOVIE VIDEO