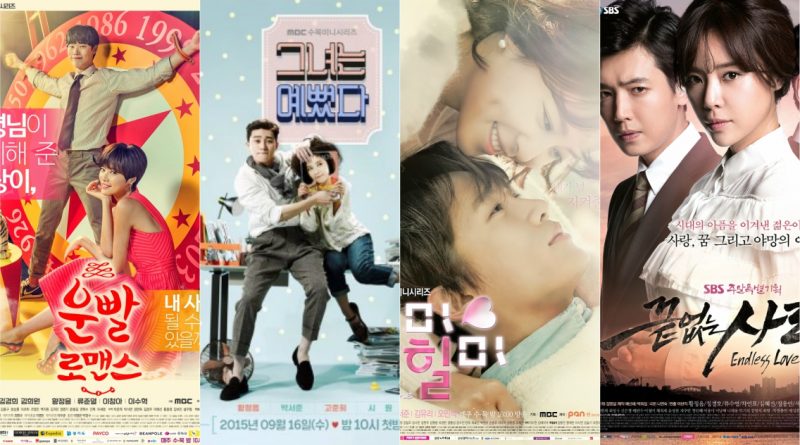 Hwang Jung Eum is a trusted Korean actress. Ranging from playing in romantic to comedy, everything can be played very nicely. Now she has become a mother by giving birth to a baby boy during Korean independence day. Here are successful dramas starring Hwang Jung Eum.

In MBC drama ‘Lucky Romance’ Hwang Jung Eum plays Bo Nui who works as a part-time worker to support her needs and pays her sister hospital bills Bo Ra (Kim Ji Min, sister has been in a coma for the past 2 years due to a car accident. Nui believes in a prophecy, she hears from an astrologer that if she does not sleep with a man born in 1986 then she will die. She met Soo-Ho (Ryoo Joon Yeol), the CEO of Zeze Game Company. He is smart but also arrogant. Soo Ho tries to get out because she has not paid her rent, then they fight each other. Bo Nui then learns that she fits with the conditions predicted by the soothsayer, while Soo Ho does not want to have sex before marriage.

In the MBC drama ‘She Was Pretty’ Hwang Jung Eum plays Hye Jin, a popular and beautiful when she was young. She has an ugly, fat little friend named Sung Joon (Park Seo Joon). However Sung Joon must move to America following his father. After 15 years passed, Sung Joon back to Korea and meet with Hye Jin. But the two have been different, Hye Jin is now not as pretty as before and Sung Joon has become fit and handsome. Due to disbelief Hye Jin asked her friend Ha Ri (Koh Joon Hee) to pretend to be her. Hye Ji becomes intern in a fashion magazine, and the editor of the magazine is Sung Joon. Finally they know each other’s identity. Hye Jin lives with her humorous friend Kim Shin Hyuk (Choi Si Won).

In the MBC drama ‘Kill Me, Heal Me’, Hwang Jung Eum plays Oh Ri Jin, the assistant of Cha Do Hyun and sister of Oh Rin Oh. The drama also stars Cha Do Hyun (Ji Sung), Oh Rin On (Park Seo Joon), and more. This drama takes on the story of multiple personality and violence against children. A traumatic childhood experience causes the third generation Cha Do Hyun chaebol (actually named Cha Joon Young) to have a memory aberration, and his personality breaks out in seven different identities. She tries to regain control over her life and is assisted by Oh Ri Jin (actually Cha Do Hyun) secretly, a resident psychiatrist of the first year, who eventually falls in love with her.

In the drama SBS ‘Endless Love’ Hwang Jung Eum plays a role as Seo In Ae. ‘Endless Love’ has a background in the 1980s. This drama revolves around the third love and revenge of Gwang Hoo (Ryu Soo Young). He is an ambitious man who is the eldest child of a poor family. Meanwhile In Ae is a hardworking woman who is ambitious to avenge her mother’s death. Gwang Cheol (Jung Kyoung-Ho) is Gwang Hoon’s brother. Since he was a child, he never stopped loving In Ae who is his brother’s lover.

June 9, 2017 Tirta Comments Off on Bigbang’s TOP is Found Unconscious After Tangled Up in Marijuana Controversy
MUSIC VIDEO