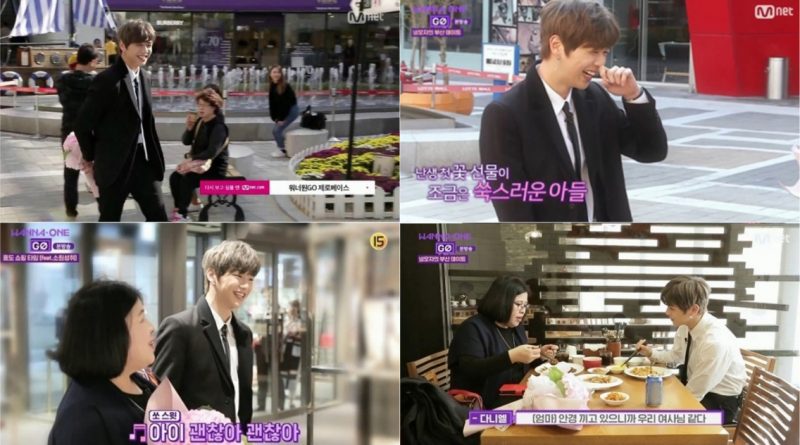 On the episode of Wanna One Go: Zero Base (17/11), Wanna One’s Kang Daniel went to his hometown in Busan to meet his mother.

In this episode, Kang daniel told his feelings, “I have not been on the train for a long time, I went to my hometown.” Arriving in Busan, he was seen buying a bucket of flowers for someone he loves.

Kang Daniel met someone. The person is his mother. Kang Daniel expressed, “I want to go out for a walk with mom.”

He added, “Songwoo went out on a date with his mother in Seoul after Mnet’s ‘Produce 101 Season 2’ was over but I had to go to Busan to date my mom so I’m very jealous” explaining the reason for going to Busan.

The mother went to lunch with her son Kang Daniel and said, “I bought all the products whose ad starring my son, I bought it not because he’s an artist” expressing her affection.

After that, Kang Daniel meet with another person. The life of Kang Daniel can be seen in reality show ‘Wanna One Go’. The next episode will feature the next person that Kang Daniel met which make fans curious.

December 13, 2017 Ria Comments Off on 2PM Lee Joon Ho’s Impression on Being The Main Character in ‘Just Between Lovers’