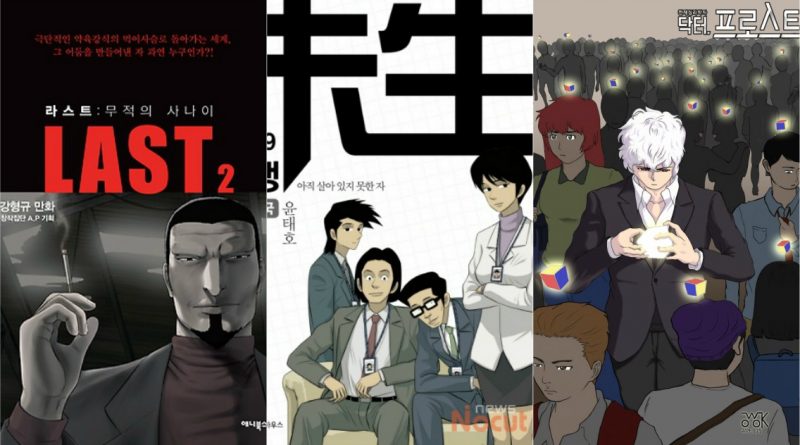 Korean drama has a varied theme, but most of the story is related to the daily life of the community. That is why more dramas have stories about romance, because that theme is more popular with the community. Not only the story of drama, comic story and webtoon also raised the theme of love even though the fantasy theme in webtoon is also popular because the imaginative stories of webtoon authors can easily be poured through pictures, unlike the drama that must be realized and associated with life. Even so there are dramas that adapt webtoon with themes other than romance, here are 3 drama webtoon adaptation with the main theme is not romance.

The drama ‘Dr. Frost ‘is a drama that aired on OCN on November 23, 2014 to February 1, 2015 every Sunday for a total of 10 episodes. The drama is based on a webtoon of the same title by Lee Jong Bum, which appeared on February 2, 2011 on the Naver website. The drama stars Song Chang Eui, Jung Eun Chae, Sung Ji Ru, Lee Yoon Ji, Choi Jung Woo, and so on. The drama is about Baek Nam Bong (Song Chang Eui), also known as Dr. Frost. He became a professor in psychology when he was young. She is a cheerful figure but has difficulty sympathizing with others due to injury to her frontal lobe since childhood. He currently works as a consultant at the campus counseling center and at night he works as a bartender. Baek Nam Bong then starts working with an assistant named Yoon Sung Ah (Jung Eun Chae) at the counseling center. Yoon Sung Ah is a very passionate figure helping clients who want to consult. They both then work together to solve the problems encountered. This drama deals a lot about mental illnesses ranging from erotomania, narcism to bipolar disorder.

The drama ‘Last’ is a drama that aired on JTBC television station on July 24th to September 12th, 2015 every Friday and Saturday at 8.40pm. The drama is finished with a total of 16 episodes. The drama is based on a webtoom with the same title of Kang Hyeong Gyu’s work published on February 28, 2011 to January 23, 2012 on the Daum website. The drama stars Yoon Kye Sang, Lee Beom Soo, Park Won Sang, Seo Ye Ji, Park Ye Jin, and so on. This drama has a genre of crime, action, and thriller. The drama tells about Jang Tae Ho (Yoon Kye Sang), a successful manager whose evidence of financial deal becomes so messy, causes a loss of money worth 350 million won and the death of his business partner. In desperation, Tae Ho runs away from the loan sharks and enters the corners of Seoul. He found a secret society of homeless people living inside Seoul Station, which has their own strict hierarchy and rules. Tae Tae Ho then aims to find out what’s wrong with his deal, and crawls from below to get his life back.

The drama ‘Misaeng’ is a drama that aired on tvN on October 17 until December 20, 2014 every Friday and Saturday at 8.30 pm. The drama is finished with a total of 20 episodes. The drama is based on a webtoon with the same title by Yoon Tae Ho published on January 20, 2012 to October 14, 2013 on the Daum website. This drama starring Siwan, Lee Sung Min, Kang So Ra, Kang Ha Neul, Byun Yo Han, and so forth. The drama has a theme of office life and is interspersed with comedy themes. This drama tells about Jang Geu Rae (Siwan) who has played chess go since childhood. But when he failed to achieve his dream as a professional player, he must enter the real world without any experience. Through the recommendation of his acquaintance, he was accepted as an apprentice worker at a large company called One International. There Jang Geu Rae meets with his superior Oh Sang Shik (Lee Sung Min), who is a person who is very happy to work and has a warm personality, he also met with a fellow apprentice named Ahn Young Yi (Kang So Ra) who attracted the attention of fellow workers because of his great knowledge and highly competent in every job, he also met with Jang Baek Gi (Kang Ha Neul), a geeky worker with hidden ambitions. Jang Geu Rae then learns to adapt to the office culture with chess go as its base.

August 15, 2017 Tri Comments Off on ‘Goblin’ Becomes the Korean Drama With The Highest Rating In Taiwan
STAR VIDEO

November 27, 2017 Ria Comments Off on Celebrities Winter Fashion at The Premiere of ‘Room No.7’