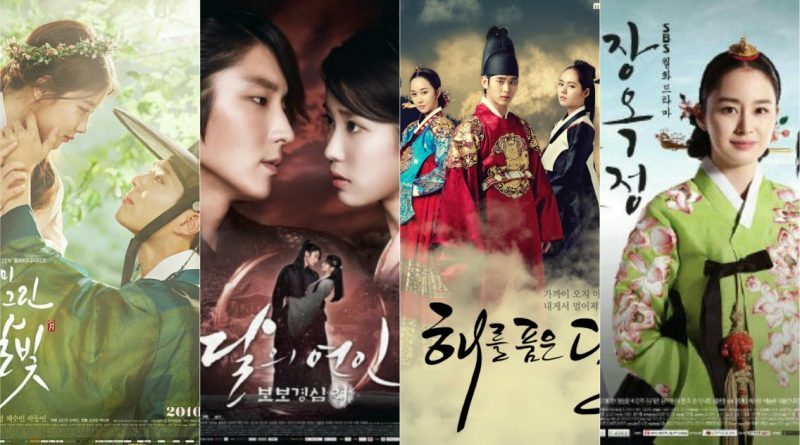 KBS drama ‘Moonlight Drawn by Clouds’ features Crown Prince Hyomyeong (Park Bo Gum), Hong Ra On (Kim Yoo Jung), Kim Yoon Sung (Jin Young), Jo Ha Yeon (Chae Soo Bin), and others. This drama revolves around a woman named Hong Ra On who is disguised as a man with a profession as a consultant affair. Starting from a love letter written for clients, Hong Ra On then met with the crown prince of Hyomyeong. The crown prince is the first son of King Sun Jo who is handsome and smart. Hong Ra On actually did not realize that she met the son of the king, and vice versa the Crown Prince did not think that Hong Ra-On is actually a woman. The story of love set in history in this Joseon era focuses on highlighting the love story of Crown Prince Hyomyeong and Hong Ra In. This drama aims to lift the story of teenage Joseon love that has not been written before.

The SBS drama ‘Moon Lovers: Scarlet Heart Ryeo’ is played by Wang So (Lee Joon Gi), Hae Soo (IU), Wang Wook (Kang Ha Neul), Wang Yo (Hong Jong Hyun), Baek A (Nam Joo Hyuk) and others. The drama series ‘Moon Lovers: Scarlet Heart Ryeo’ is about an Imperial heir named Wang So who does not reveal himself when in public and does not like the spotlight too much. Wang So is a figure of a man born with a cold personality, but he still has a high royalty. He hides his face beneath the mask and is dubbed a ‘dog wolf’ by others and makes others frightened when they see him. Meanwhile, there is a woman named Ko Ha Jin who had time travel back to the Goryeo Dynasty, she woke up in Hae Soo’s body. She tried to adapt to the new environment. Love, competition, politics, and friendship that arose between handsome princes turned into seizing the throne and love.

3. The Moon Embracing The Sun

MBC drama ‘The Moon Embracing The Sun’ is played by Wol (Han Ga In), Lee Hwon (Kim Soo Hyun), Prince Yangmyung (Jung Il Woo) and others. The drama tells of the secret love story between Lee Hwon, a Joseon fictional king, and Wol, a female shaman. Wol was born as Heo Yeon Woo, the daughter of a noble family who won the crown prince, Hwon. His enemies, jealous of his family’s position in court, conspire against him and wrestle away where a proper crown princess almost took his life. Years later, a Hwon hurt to meet Wol, now a female shaman who does not remember his past. The drama with the theme of history and fantasy is adapted from a novel of the same title by Jung Eun Gwol. This drama is about the forbidden love of the King in Joseon Dynasty  and a shaman.

The drama SBS ‘Jang Ok Jung, Living by Love’ starring Jang Ok Jung (Kim Tae Hee), Lee Soon (Yoo Ah In (Lee Soon), Queen Inhyun (Hong Soo Hyun), Hyun Chil Soo (Jae Hee), and “Jang Ok Jung, Living by Love” tells the story of Jang Ok Jung who is one of the most beautiful king’s prince in the most famous kingdom Jang Ok Jung who came from a lowly family changed after a meeting with Crown Prince Lee Soon made his life and mother he is appointed a special court lady and then proceeds to become a concubine, the only woman beloved by Emperor Sukjong, but because of the love of Emperor Sukjong to him, he becomes the enemy of Queen Myeongseong, Empress In Hyeon, and the Western Party led by Min Yoo Joong, the father of Consort In Hyeon.