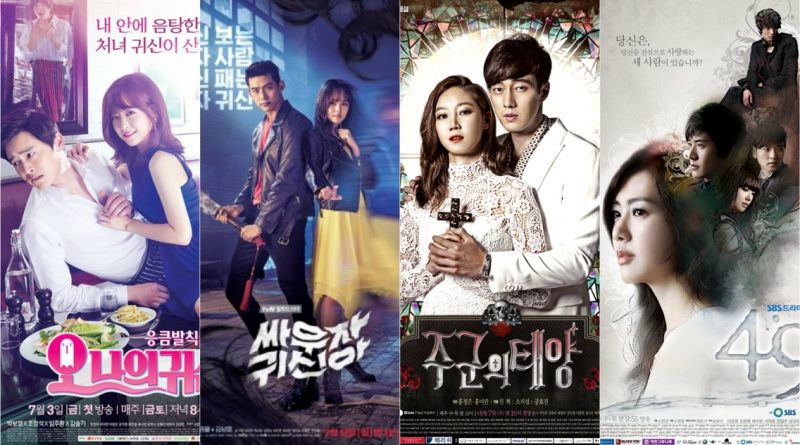 Korean drama has a variety of themes. One is a drama that has a ghost theme. It is usually said that the main character of the drama can see the ghosts, and ultimately help the ghosts solve their problems so they can return to the afterlife. Here are 4 Korean dramas that have themes about ghosts.

The drama ‘Oh My Ghost’ aired on tvN on July 3 to August 22, 2015 every Friday and Saturday for a total of 16 episodes. This drama starred Park Bo Young, Jo Jung Suk, Kim Seul Gi, Lim Joo Hwan, and so forth. In this drama Park Bo Young plays the role of Na Bong Sun, a worker in a restaurant from a small age can see a ghost because her grandmother is a shaman. Because of this, Na Bong Sun becomes very closed, inferior, and has no friends. Na Bong Sun secretly likes the chef of the restaurant owner where she works, named Kang Sun Woo (Jo Jung Suk). One time she was possessed by a ghost named Shin Soon Ae (Kim Seul Gi) who has a nature inversely proportional to herself. As Shin Soon Ae takes over the body of Na Bong Sun, she approaches Kang Sun Woo with a very aggressive and makes Kang Sun Woo begin to notice Na Bong Sun.

The drama ‘Let’s Fight Ghost’ aired on tvN on July 11 until August 30, 2016 every Monday and Tuesday for a total of 16 episodes. The drama is based on a webcomic titled the same works of Im In Seu, which was released in June 2007 until November 2015 on the Naver website. The drama stars Kim So Hyun, Taec Yeon, Kwon Yool, and so on. The drama tells of Hyun Ji (Kim So Hyun), who studied constantly while she lived until she died at the age of 19 years. Now she became a ghost who has traveled the world for several years. Hyun Ji then meets with Park Bong Pal (Taec Yeon). Park Bong Pal is an exorcist. Next Hyun Ji and Park Bong Pal work together to listen to the ghost stories and lead them to the afterlife.

The drama ‘The Master’s Sun’ aired on SBS television on August 7th through October 3rd, 2013 every Wednesday and Thursday for a total of 17 episodes. This drama starring So Ji Sub, Gong Hyo Jin, Seo In Guk, and so forth. The drama is about Gong Shil (Gong Hyo Jin), who can see and hear ghosts after an accident. She cannot live a normal life because she is always afraid of the ghosts around her. One time when she was running from the ghosts, she accidentally in contact with Joong Won (So Ji Sub) and she realized when she holds Joong Won, the ghosts around her will disappear. She is happy to find a way to make the ghosts around her disappear, and finally she decided to meet Joong Won again.

The drama ’49 Days’ aired on SBS television on March 16th to May 19th, 2011 every Wednesday and Thursday for a total of 20 episodes. The drama starred Lee Yo Won, Nam Gyu Ri, Jo Hyun Jae, Jung Il Woo, Bae Soo Bin, and so on. In this drama Nam Gyu Ri plays the role of Shin Ji Hyun, the only daughter of a family of conglomerates who has a perfect life of swarming treasures. She’s even engaged to be married to Kang Min Ho (Bae Soo Bin). Meanwhile, Song Yi Kyung (Lee Yo Won), a woman who is still saddened by the tragic death of her boyfriend often spends time thinking about the right day to commit suicide. One day Yi Kyung attempts suicide by walking on the highway, at the same time Ji Hyun has an accident for crashing into a truck. Ji Hyun fell into a coma and her soul wanders, then she meets a ghost called Scheduler (Jung Il Woo). The dearth angle tells Ji Hyun that if within 49 days 3 people other than his family shed a real sad tear, he can wake up from a coma and live again.