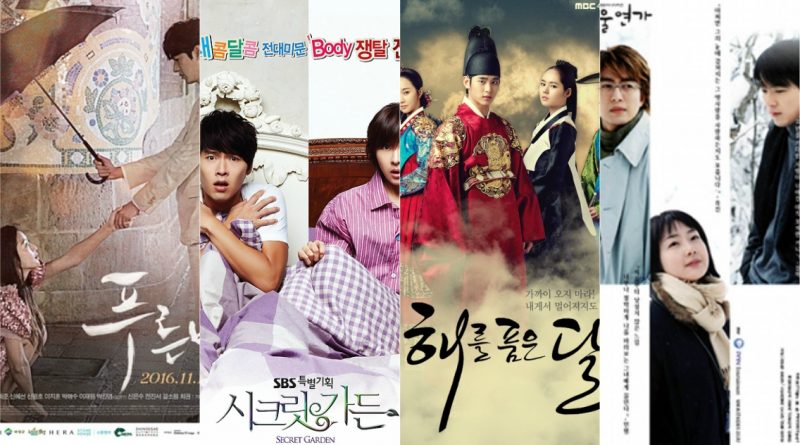 The SBS drama ‘The Legend of the Blue Sea’ is played by Se Hwa (Jun Ji Hyun), Dam Ryung (Lee Min Ho), Jo Nam Doo (Lee Hee Joon), and others. This drama inspired from the classic Joseon legend of the unofficial history of Korea’s first collection, of a fisherman who captures and releases a mermaid, this drama tells a love story between the son of a Joseon aristocrat family named Dam Ryung and a mermaid named Se Hwa. When Dam-ryeong was small, he nearly drowned but was rescued by mermaids. After the incident, they become friends and Dam RyUng named him Se Hwa, according to his sister’s name. They finally fall in love, but one day Dam Ryeong is forced by his family to marry another girl. However, the destiny of Dam Ryung and Se Hwa re-established with their modern incarnation. Dam Ryung is reborn as Heo Joon Jae, a captivating impostor. He meets a mermaid similar to Se Hwa (Shim Chung) in Spain, and he is easily fooled by her.

The SBS drama ‘Secret Garden’ starring Gil Ra Im, (Ha Ji Won), Kim Joo Won (Hyun Bin), Oska (Yoon Sang Hyun), Yeun Sul (Kim Sa Rang), and others. This drama tells the story of a real world cinderella between Gil Ra Im a poor but humble stutwoman with Kim Joo Won who is an arrogant CEO and is a charming modern prince. Their second encounter happened by chance, when Joo Won misunderstood Ra Im as actress Park Chae Rin. The meeting was the beginning of the tension between them and continued into contention. Joo Won is fascinated with Ra Im at first glance, though he usually has a pretty high-level lady’s taste and he does not believe in love at first sight. Joo Won does not understand why he can be fascinated by Ra Im and the thought continues to seize his thoughts. But the problem gets complicated as the story becomes more strange where they exchange bodies.

3.’The Moon Embracing The Sun’

MBC drama ‘The Moon Embracing The Sun’ is played by Wol (Han Ga In), Lee Hwon (Kim Soo Hyun), Prince Yangmyung (Jung Il Woo) and others. The drama tells of the secret love story between Lee Hwon, a Joseon fictional king, and Wol, a female shaman. Wol was born as Heo Yeon Woo, the daughter of a noble family who won the crown prince, Hwon. Her enemies, jealous of her family’s position in court, conspire against her and wrestle away where a proper crown princess almost took her life. Years later, Hwon was hurt and met Wol, now a female shaman who does not remember her past. The drama with the theme of history and fantasy is adapted from a novel of the same title by Jung Eun Gwol. This drama is about the forbidden love of the Joseon Dynasty King and a shaman.

The drama KBS ‘Winter Sonata’ starring Choi Ji Woo (Jung Yoo Jin), Kang Joon Sang (Bae Yong Jun), Lee Min Hyung (Bae Yong Jun), Kim Sang Hyuk (Park Yong Ha), Oh Chae Lin (Park Sol Mi), and others. The story begins when Joon Sang, the son of a very famous painter, moves to a small town called Chuncheon in South Korea. Joon Sang is a quiet and talented boy, he is also liked by his teacher and his friends. Joon Sang believes that no one likes or loves him, because his father died after a fight with his mother. At one time Joon Sang met with his schoolmate named Yu Jin, eventually they both fell in love. But their relationship did not last long, because Jong Saan had a great accident so he was diagnosed with Amnesia due to brain damage.