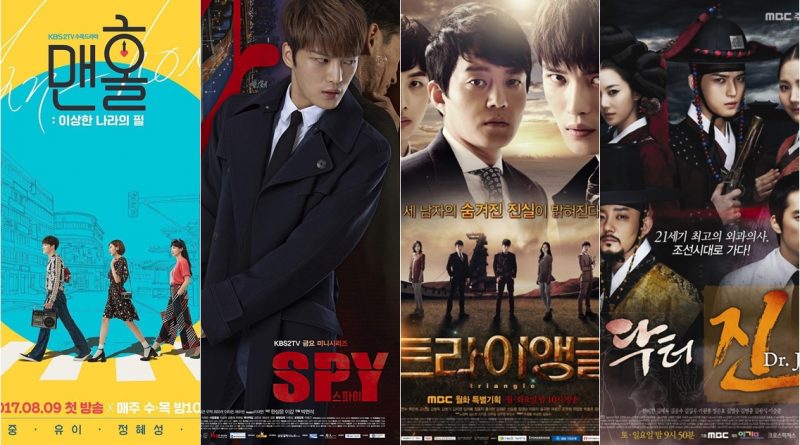 Kim Jae Joong, in his childhood, was adopted by Kim’s family. His name changed from Han Jae Joong to Kim Jae Joong. In 2001, at that time Kim Jae Joong was 15, he moved to Seoul from Gongju village inChungcheongnam-do, to take part in an audition conducted by SM Entertainment. From 2003 to 2010, he became the lead vocalist of TVXQ, SM Entertainment’s biggest boy group. In 2010, Jaejoong and two other members Park Yoo Chun and Kim Jun Su left TVXQ and set up their own group JYJ. Jae Joong is adept at writing songs, acting and directing.

‘Manhole’ is the drama that became Kim Jae Joong’s comeback after the military service. The JYJ’s member is back to the world of acting through drama with the theme of travel time. But Manhole is different from other time travel dramas because the time travel that happened seemed random and has a butterfly effect. Bong Pil (Kim Jaejoong) is a man who has no merit whatsoever and does not have anything to be proud of in his life. He is unemployed and his job is just making trouble in his village. Even his parents no longer recognize him as a child. He is busy preparing for a test to become a policeman, but all of his focus suddenly dissolves when he learns that the woman he loves named Soo Jin (UEE) will be married within a week. Sujin works as a photographer. Although Bong Pil has been in love with Sujin since they were young, but never once Bong Pil can confess his feeling to Sujin. Upon learning that Sujin will marry a pharmacist named Jaehyun (played by Jang Mikwan) within a week, Bong Pil’s attitude is like a madman. Then one day, exactly at 12 o’clock, Bong Phil is sucked into the manhole and begins traveling time to prevent Soo Jin’s marriage.

The Korean drama Spy tells the story of Kim Sun Woo’s (Kim Jae Joong) life as a field agent for South Korea. One day Sun Woo is the only person free from the tragedy of killing by the North Koreans. Because Sun Woo is still alive after all of Sun Woo’s companions die, then Sun Woo is suspected of being a spy in favor of North Korea. Sun Woo himself also does not understand why he is still alive, when in fact the reason Sun Woo was not killed is that he is the son of Park Hye Rim, who is a former North Korean agent who did not know that Sun Woo is working as a Field Agent. In addition to Kim Jae Joong, the drama also starred Bae Jung Ok, Yoo Oh Sung, and Go Sung Hee.

“Triangle” is Jaejoong’s last drama before entering the military. It is about separate siblings. Jaejoong performs differently from his image as a flower boy by transforming into a gangster. A drama of three brothers reuniting after 20 years, since the death of their parents from two decades ago. Jang Dong Soo (Lee Bum Soo) is the eldest brother who works as a detective. Jang Dong Chul (Kim Jae Joong) is the second brother to become a gangster. Meanwhile, Jang Dong Woo (Im Si Wan) is the maknae brother who was adopted by a wealthy family when he was an infant. When the three siblings were very small, they lost their parents. The three siblings were then separated and lived apart for 20 years without knowing each other. They then meet again suddenly and start their relationship as brothers.

This drama tells the story of a neurosurgeon accidentally thrown into Joseon’s time named Jin Hyuk (Song Seung Hun). Initially, he performed surgery on the brain of a patient where in the patient’s brain there was a tumor similar to the embryo. One day he caught the patient secretly taking the embryo box resulted in an interesting pull between the doctor Jin with the patient. Doctor Jin was pushed and got into the Joseon era. At Joseon’s time he meets Lee Ha Eung (Lee Bum Soo) who will help him adapt to an era unfamiliar to him. In Joseon’s time, Jin practiced his skills to help people in need with the equipment. In this drama, Kim Jae Joong plays Kim Kyung Tak who is the illegitimate son of Kim Byung Hee where he is the main leader of Ahn Dong Kim’s most powerful family in the Joseon era. Kim Kyung Tak is the most famous military officer with excellent military ability. He has pride and high competitiveness but he falls in love with a common citizen.