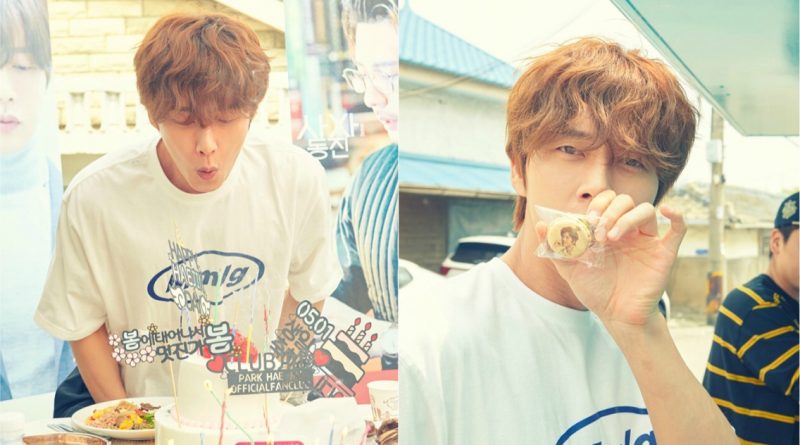 Actor Park Hae Jin celebrated his birthday party with gifts from his fans and also the staff.

Mountain Movements posted pictures of Park Hae Jin celebrating his birthday through their official social media with captions “I’m always in the filming set on my birthday. I always celebrate my birthday with the fliming staff. I guess it’s good that I actually learn a lot. To Jin Sung and those who celebrated my birthday. Happy birthday~ I love ‘Lion’ production team.

Park Hae Jin later stated “The coffee truck that you’ve sent me for my birthday, and all kinds of food starting from tteok and sikhye, I guess I’ll treat the staff better. Thank you~” he said as he received a lot of gifts and support from his fans and staff.

In order to celebrate his birthday, Park Hae Jin’s fans sent him a coffee truck to the filming set of ‘Lion’. Park Hae Jin also posed with the tteok and the sikhye while expressing his grateful to his fans.

He has been receiving a lot of love and support from his loyal fans since the beginning. He also shared candles and towels to all the staff in the filming set.

Meanwhile, ‘Lion’ told a mystery tale of a man who tried to dig up the secret of his mother and ended up getting involved in bigger matter where he met the other people who have face exactly look like him. Park Hae Jin, Kwak Si Yang, Lee Ki Woo, Kim Chang Wan and park Geun Hyung will also appear in this drama.

Park Hae Jin will play the role of 4 characters in one person, including Kang Il Hoon, the chef of staff in a huge company.