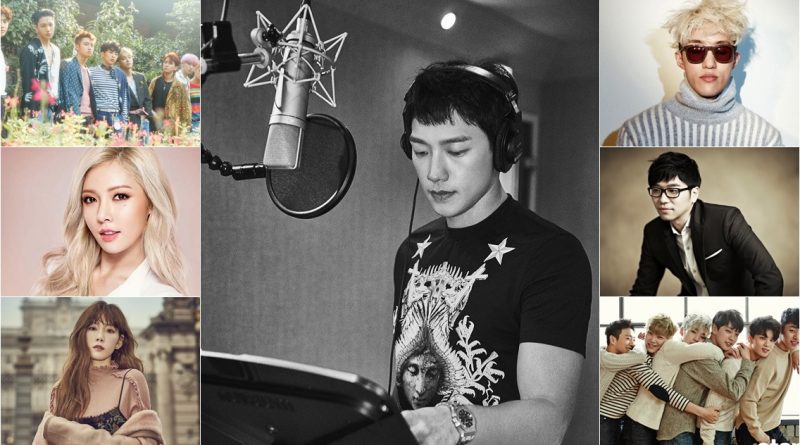 The entertainment industry is heating up in December when various awards have been held in November. Usually, artists are reluctant to come back after the music awards ceremony at the end of the year is over. But in December this year, there is a lineup of singers who will appear. The musicians are happy to make a comeback and show their strength in the music industry. Here are a series of colorful comebacks.

Rain returns after 3 years. On 24th he released the song ‘Let’s Break Up Today’ and on December 1st will release a mini album titled ‘My LIFE’. He became the man who made his first comeback in December. Through this album, Rain has been working for 15 years in the music industry. Debut in 2002, Rain began to design a package containing photographs that have not been published since the debut.

Zion. T will release his first song of winter. Zion. T will be comeback with single digital ‘Eyes’ on December 4th. The song this time attracted attention because of the first collaboration with singer Lee Moon Se. Zion’s new style. T who has played his unique music with G-DRAGON, IU, Crush, and Beenzino is increasingly anticipated.
Hyuna, Summer Queen in Winter

Hyuna will make a comeback in winter. Hyuna has confirmed her new song for the comeback on December 4th. Hyuna performs on stage with strong and outstanding performance. After 4 MINUTE is disbanded, Hyuna performs activities with Pentagon’s Hui and E’Dawn as Triple H. She is also active as a solo artist. How will Sexy Queen Hyuna’s comeback appear in winter?

Lee Juck’s comeback is one of the biggest events in December. Lee Juck who has been stable for a long time will come back on December 14 with his new song. Ahead of the comeback, he published the book within 12 years. Lee Juck will hold a comeback with a solo concert. The reason many are waiting for the release of Lee Juck’s new song is that he has not made a comeback for a long time.

Taeyeon, Growing Up After SNSD

SNSD member Taeyeon will also make December winter special comeback by launching a new song. Taeyeon successfully completed activities in the entertainment industry for 10 years since her debut with SNSD. She plans to meet fans with a new song next month. We can have trust in Taeyeon’s works because she has very strong musical abilities. It is expected that this new song will be a hit.

EXO also plans a comeback in December. This week, EXO held a concert at Gocheok Dome and in December will be releasing a special winter album. The album that is released every seasonal season this year is a gift for fans since 2013. SM Entertainment said, “Winter special album is being prepared and will be released in December.”

Group B.A.P will also release their eighth single in December. B.A.P first released the teaser image and predicted the atmosphere of their new song. Members who show off their extraordinary aura have attracted attention. This single will make B.A.P appear more colorful and different from the previous one.