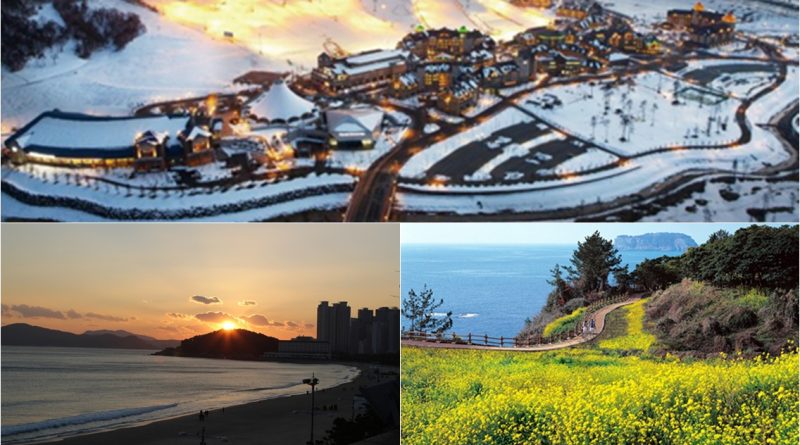 Korea does not just have Seoul! Although Seoul is the capital city of the ginseng coun but there are many other interesting cities that you can visit in South Korea. Kangwon, Busan, and Jeju Island are interesting places that are outside the Seoul area. What these three areas offer, let’s look at the reviews!

In winter, this place is famous for skiing. Hill areas in Kangwon must be visited. Even this ski area is among the best in the world. So no wonder this place is often used as the location of Korean drama filming. The 2018 Pyeongchang Olympics will also take place in Kangwon. Also in Kangwon there is Mount Seorak and Namiseom (where the famous winter sonata shoot).


What comes to mind when we hear the word Busan? A typical dialect? Or handsome actor Gong Yoo? Busan is quite famous outside South Korea to be the title of the movie ‘Train to Busan’. Even one of Korea’s famous film festivals takes the location and name of Busan. In dramas, Busan people are usually synonymous with saturi dialect. Busan is the second largest city known for its pristine panorama. Unlike the crowded Seoul, Busan offers the beauty of mountains, seas and rivers.

This place is not only visited by tourists, but the Korean people like to spend time in Jeju island. Unlike the two previous areas, Jeju can only be reached by air or sea lane. Jeju is like Bali for Indonesians. Jeju does offer a beautiful view of the clear and beautiful sea. The best time to visit Jeju Island is the spring when the flowers are in bloom. The typical yellow color of Canola flowers adorns the streets of Jeju and is very beautiful. This is suitable for taking photos for tourists. So make sure Jeju as one of your holiday destinations in Korea.