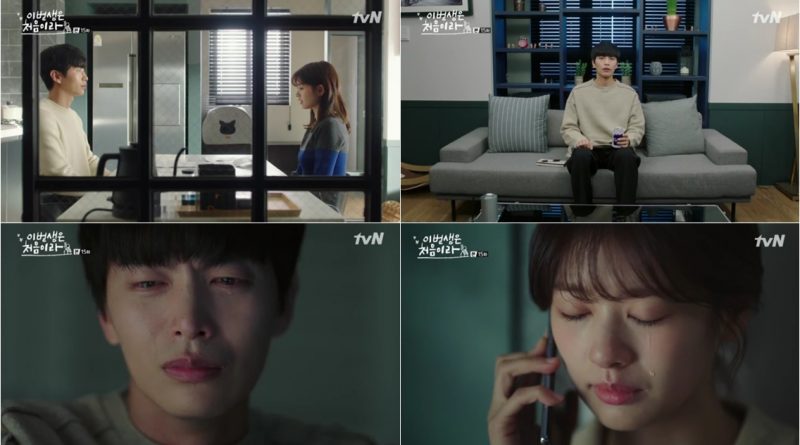 Se Hee has not had time to express his feelings and decided to cheer on Ji Ho’s future. “Marriage for love will be happy right?” Ji Ho asked what the real meaning of marriage is, while Se Hee could not say anything. Viewers feel the sadness of separation of two hearts that love each other.

After that both tore the contract with their respective approval. In his heart, Se Hee says, “I bought you a present. There are still plenty of soccer games to watch with you “while staring at Ji Ho sadly. After Ji Ho packs up and leaves the house, Se Hee returns to his old life. Do nothing, go to the office and watch the ball while drinking canned beer, as usual. But he looked at the cat given a necklace that read ‘Woori’ and his heart hurt.


Because Ji Ho, Se Hee sobbed. He already realizes his feelings for Ji Ho who first knew about his past, but the situation actually turned and made each psychological change. The longing felt increasingly sad, the more painful. The feeling is real to the viewers.

There are several steps for Ji Ho to finally break the marriage contract. Her mother said “Because it fits, all marriages are like that” while handing over her account. What she meant is that if married, a house is a man’s right, and a woman gives birth to a child. It becomes pressure and complicated for Ji Ho. She also felt Jung Min’s words “Marriage intertwined for love for many people” about the marriage system according to him. It also becomes a burden for Ji Ho.

Not only that, she also conveyed something to her mother-in-law, “I do not want to be an intermediary between Se Hee and his parents.” Ji Ho’s statement explained why she should make the decision to leave. When there is no love, marriage feels more comfortable because there is no concern for work. But as love grows, she realizes it will not be that way again.

Shortly before leaving, Ji Ho asked what Se Hee used to do while in intermission, time between the first and second in the game. A lot of things to do, Ji Ho said to Go Jung Min “Divorce is not the sad ending” then what is the conclusion of Ji Ho’s decision?