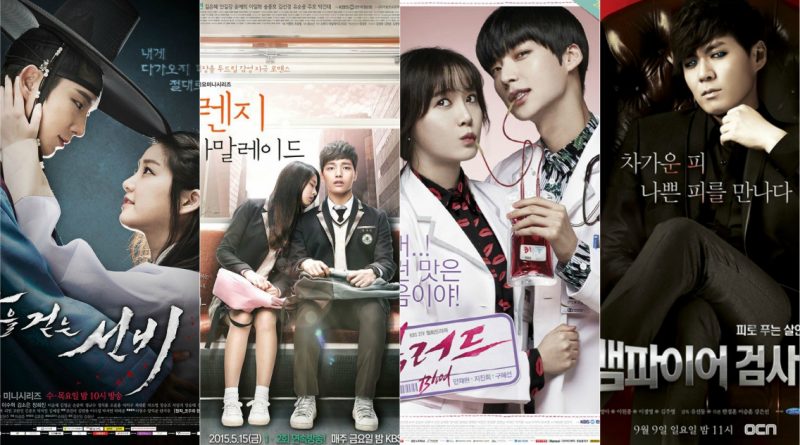 Vampire is portrayed differently in various countries. The vampire in China for example, is famous for its way of jumping and reaching forward. Meanwhile, in the western country, the title vampire which is better known by the name of Dracula who has pointed teeth and black robe. South Korean version of vampire is also different. These four dramas have a vampire theme that might represent what the Korean version of vampire looks like. Let’s see the review.

1. ‘Scholar Who Walks the Night’

MBC drama ‘Scholar Who Walks the Night’ is played by Kim Sung Yeol (Lee Joon Gi), Jo Yang Sun (Lee Yoo Bi), Crown Prince (Shim Chang Min), Gwi (Lee Soo Hyuk), and others. The drama is conducted against the background of the alternative Joseon dynasty where Jo Yang Sun (Lee Yoo Bi) is the daughter of a nobleman whose family lost everything when her father was trapped for treason. To meet his needs, Yang Sun began dressed as a male bookseller and met a handsome and mysterious scientist Kim Sung Yeol (Lee Joon Ki), who works at Hongmungwan. Sung Yeol is a vampire, and he is constantly haunted by the death of his long-time love of Lee Myung Hee (Kim So Eun), especially when he meets Myung Hee today, Choi Hye Ryung, the noble daughter. Meanwhile, the evil vampire, Gwi (Lee Soo Hyuk), lives in the royal palace and uses his political powers and intrigues to prevent the Crown Prince (Shim Chang Min) ascending to the throne.

The fantasy drama adapted from a webtoon describes a vampire figure whose life coexists with humans. The fate of vampire in this drama is actually afraid of humans because many get discriminated and ostracized. So they live in hiding and no longer rely on human blood to live. They disguise and work like ordinary people. Baek Ma Ri (Seohyun) is a teenage girl who hides her identity as a vampire and tries to live quietly in a new city. She accidentally bites Jung Jae Min (Yeo Jin Goo), her popular schoolmate.

This time, this vampire has a profession of a doctor. Park Ji Sang (Ahn Jae Hyun) is a specialist doctor of gallbladder hepato pancreato at cancer hospital. But he is actually a cold and emotionless vampire. Ji Sang covers his tender heart and longs for the closeness of the person he loves. He believed he could live like a human and withstand the thirst to drink blood. Instead, he treats the patient to reduce his longing. Then he falls in love with Yoo Ri Ta (Goo Hye Sun) who is the niece of the head of the conglomerate group of hospital owners.

OCN’s Drama ‘Vampire Prosecutor 2’ starring Min Tae Yeon (Yeon Jeong Hun), Yoo Jung In (Lee Young Ah), Hang Soon Bum (Lee Won Jong), Jo Jung Hyun (Lee Kyoung Young), Choi Dong Man (Kim Joo Young), and others. ‘Vampire Prosecutor 2’ Still tells the story of Min Tae Yeon (Yun Jung Hoon). a mostly vampire who likes to drink the blood of the Still alive, but Min Tae Yeon More Chooses to drink the blood of those who are sold on the black / underground market in Seoul. Compared to him having to drink blood from innocent people Min Tae Yeon also has a remarkable ability to solve murder cases, as well as how they died just by smelling the blood and feeling him.The only person who knows his secret ability is Detective Hwang Soon Bum (Lee Won Jong) .They finally work together to uncover the Mysteries of murder cases, one day they uncovered an unsolved murder case seven years ago involving a vampire. Until Min Tae Yeon’s friends were suspicious that it’s Min Tae Yeon.

June 18, 2017 Tirta Comments Off on What Does Tilda Swinton Think about Bong Joon Ho, Director of ‘Okja’?
MUSIC VIDEO