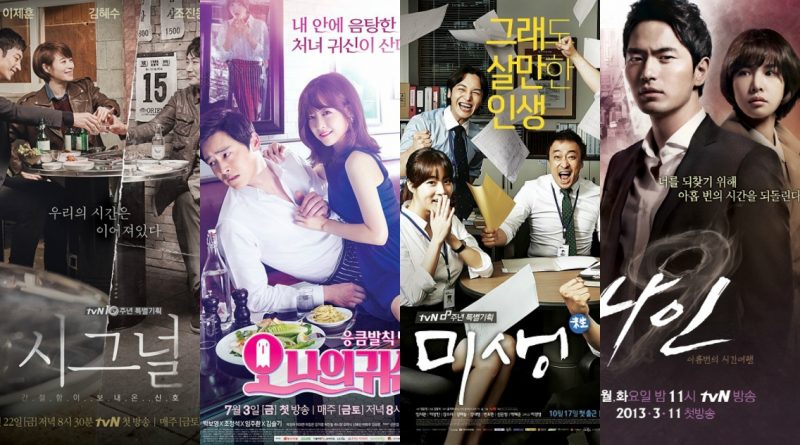 tvN is one of the Korean cable television that has aired a lot of high-quality dramas. Among the dramas that aired, a lot of the biggest TVN works. These dramas make tvN to be one of the always-awaited television dramas. not just drama or gin, but the weekend drama also recorded a record of viewer ratings. Here is a masterpiece drama tvN.

TVN drama ‘Signal’ starring Park Hae Young (Lee Je Hoon), Cha Soo Hyun (Kim Hye Soo), Lee Jae Han (Cho Jin Woong), Kim Bum Joo (Jang Hyun Sung), and others. The Korean drama ‘Signal’ is based on a true story of a criminal case that had taken place in Hwaseong, Geyonggo Province, South Korea for six years from 1986 to 1991. Many women were killed and ranged from 71-year-old grandmother to schoolchildren who still 13 years old. This drama is about a modern / modern detective who works with detectives of the past and communicates by using walkie-talkies to solve an old case and event that has not been resolved yet. Park Hae Young found an ancient walkie talkie that allowed her to communicate with detective Lee Jae Han in the past. Park Hae Young is then assigned to a special unit of cold case team together with detective Cha Soo Hyun, helping each other with detective Lee Jae Han solving the case in their respective time. The various cases solved Park Hae Young and Lee Jae Han, who later realized that their communication is meant to solve cases related to their own and their decisions will determine what the world is like in the future.

The drama ‘Oh My Ghost’ airs on tvN on July 3rd to 22nd August 2015 every Friday and Saturday for a total of 16 episodes. This drama stars Park Bo Young (Na Bong Sun), Jo Jung Suk (Kang Sun Woo), Kim Seul Gi (Shin Soon Ae), Lim Joo Hwan (Choi Sung Jae), and so on. In this drama Park Bo Young plays the role of Na Bong Sun, a worker in a restaurant from a small age can see a ghost because her grandmother is a shaman. Because of this, Na Bong Sun becomes very closed, inferior, and has no friends. Na Bong Sun secretly likes the chef of the restaurant owner he works, named Kang Sun Woo (Jo Jung Suk). One time he was possessed by a ghost named Shin Soon Ae (Kim Seul Gi) who has a nature inversely proportional to himself. As Shin Soon Ae takes over the body of Na Bong Sun, she approaches Kang Sun Woo with a very aggressive and makes Kang Sun Woo begin to notice Na Bong Sun.

Drama tvN ‘Misaeng: Incomplete Life’ starring Jang Geu Rae (Siwan), Oh Sang Sik (Lee Sung Min), An Young Yi (Kang So Ra), Jang Baek Ki (Kang Ha Neul), and others. ‘Misaeng: Incomplete Life’ is one of the drama that takes the theme of the work. Through this drama, we can witness indirectly the work competition in Korea is quite sad. Tells the story of Jang Geu Rae (Im Siwan) who is a former badger player but failed to reach a professional stage. Eventually he had to give up his dream to become a badger player and start entering the real world. Since Jang Geu Rae is just a high school graduate and accepted internship at the company because of the connection, he is often underestimated by his co-workers. He is considered less competent and the first candidate will not be accepted as a permanent employee. But his efforts were able to attract the attention of the directors and was selected as one of the contract employees among the many apprentices. Not only was there Jang Geu Rae’s misery, the various problems faced by his division and alienated by his leadership made Jang Geu Rae constantly trying to prove his worth. ‘Misaeng’ starring also by Lee Sung Min, Kang So Ra, and Kang Haneul.

The drama tvN ‘Nine: 9 Times Time Travel’ starring Park Sun Woo (Lee Jin Wook), Joo Min Young (Jo Yoo Hee), Park Jung Woo (Jeon No Min), Son Myung Hee (Kim Hee Ryeong), and others . This fantasy melodrama tells the story of a broadcaster on a TV station, Park Sun Woo who falls in love with new reporter Joo Min Young. He was given 9 opportunities to travel back in time to solve crimes that occurred 20 years ago. This drama begins when a man named Park Sun Woo who accidentally found an incense stalk as much as 9 pieces. The incense sticks are not just any incense, because they have magical powers that can make them go to the past 20 years earlier. After returning to the past, he tried to fix all the problems that exist and keep his family to stay safe and change the world. However, he does not realize if his actions are very contrary to the will of nature. So it can compose the future of himself and all human beings living in the world.