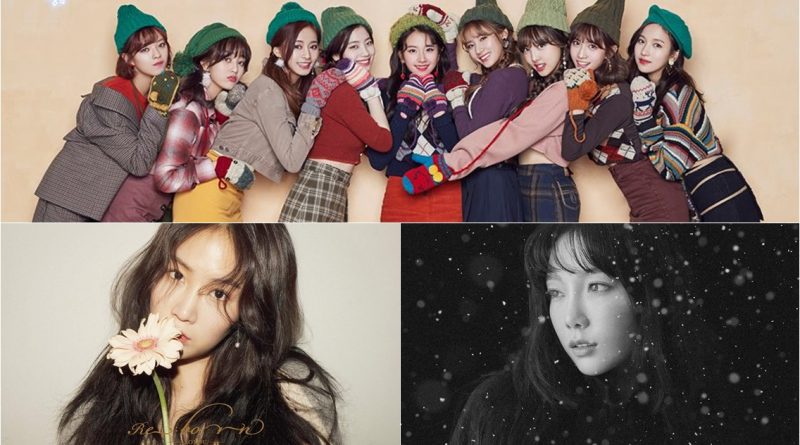 The year will soon change. The announcement of female singers’ comebacks is predicted to dominate the charts. TWICE, Taeyeon, Soyu, are the 3 stars that attract fans. First start with TWICE. They have released the song ‘Knock Knock’ in February, ‘Signal’ in May, and ‘Likey’ in October. Each of their songs became hits and Twice released a winter album for the first time.

The repackage album ‘Merry & Happy’ which is the 11th release contains 15 tracks including 2 new songs, and one song from its first regular album ‘TWICETAGRAM’. Among the songs, ‘Heart Shaker’ is Twice’s most compelling song and able to beat its rivals. Twice’s song ‘Merry & Happy’ carol song, contained the lyrics about first falling in love with the sound of winter and expressing the fun of Christmas.

On the 12th, SNSD’s Taeyeon released her first winter album ‘This Christmas? Winter Is Coming ‘. The album contains 8 tracks, including her new song ‘This is Christmas’ filled with colorful music for Christmas nuances. ‘This Christmas’ is an authentic ballad accompanied by the extraordinary sound of orchestra and the subtle voice of Taeyeon, she prays that the precious Christmas memories will return soon. For 3 days, from the 22nd ~ 24th, Taeyeon will hold ‘TAEYEON SPECIAL LIVE’ The Magic of Christmas’ at Kyunghee University, Seoul. The performances for the new album will be dedicated to fans.

Soyu who debuted from the group SISTAR also released ‘SOYOU THE 1ST SOLO ALBUM PART.1 RE: BORN’. Previously she collaborated with Urban Zakapa and Baek Hyun. It comes with the name ‘Collaborative Goddess’ and draws attention to the colorful artist formation. Sung Si Kyung and Yoon Jong Sin are known to participate in this album. Soyu will feature stunning, mature, and emotional vocals as a solo through this album.