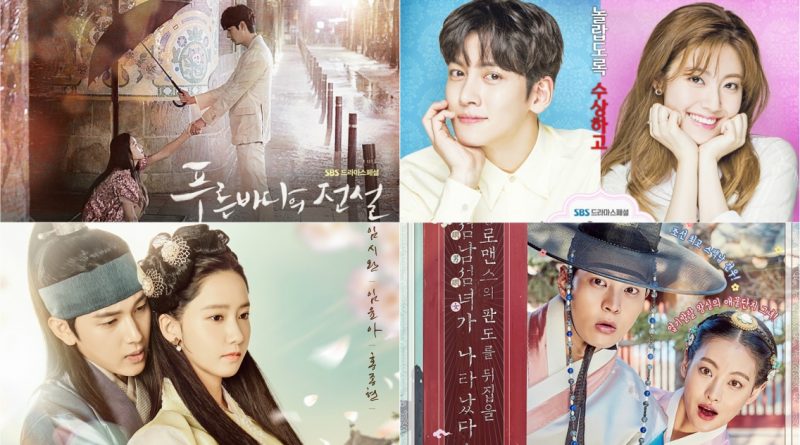 In 2017, many Hallyu stars entered the military. Lee Min Ho just started his social service at Gangnam headquarters, Seoul on May 12th. While Joo Won in May, Ji Chang Wook in July and Im Siwan in August. But the four famous actors are still thinking of their fans. Before undergoing military service, they have prepared the last drama that will be aired for fans. Here are 4 drama works from the actors before undergoing military service.

SBS drama ‘The Legend of The Blue Sea’ which consists of 20 episodes managed to steal the attention of the audience until this drama always occupy the first position in the drama slot Wednesday-Thursday. This romantic drama is a drama featuring the past and the present. ‘The Legend of The Blue Sea’ tells about Shim Chung (Jun Ji Hyun) who is a mermaid who finds himself in modern times. He is captured by Heo Joon Jae (Lee Min Ho) who is a cheater. The love story of the two full of twists and turns begins. In this drama, Lee Min Ho plays the role of Heo Joon Jae in the present and Dam Ryung in Joseon’s time. While Jun Ji Hyun role as mermaid named Shim Chung. Both had met in the Joseon era and later reunited in modern times. In addition to Lee Min Ho and Jun Ji Hyun, the drama also features Lee Hee Joon, Shin Won Ho, Shin Hye Sun, Lee Ji Hoon, and others. The most interesting of these dramas are the top stars who came cameos like Krystal, Cha Tae Hyun, Jo Jung Suk, and others.

SBS ‘Suspicious Partner’ drama released on 10 May 2017 is genre romance, comedy, thriller and has 40 episodes. The drama is played by No Ji Wook (Ji Chang Wook), Eun Bong Hee (Nam Ji Hyun), Ji Eun Hyuk (Choi Tae Joon), Cha Yoo Jung (Nara), and others. this drama tells of a lethargant forgetfulness can be a dangerous thing. Noh Ji Wook is a prosecutor who turns the profession into a private lawyer in a powerful law firm. Meanwhile, Eun Bong Hee is a prosecutor who works with prosecutor Cha Yoo Jung who is an ex-boyfriend Ji Wook who is eager to return with him. Lawyer Ji Eun Hyun is an old friend of Ji Woon but among them arises resentment about the circumstances of their different families. No Ji Wook and Eun Bong Hee are targeted by an assassin who suffers from amnesia (loss of memory). Because of his illness, the killer keeps trying and tries to kill them both.

The MBC drama series ‘King Loves’ which is directed by Kim Sang-Hyub will also bring in other actress Park Hwan-Hee, Hong Jong-Hyun. Pen San (Yoona), Wang Rin (Hong Jong Hyun), and others. This drama setting will be focused on the Goryeo empire. Won played by Siwan is the Crown Prince Goryeo. He’s a handsome face even because of his good looks He looks very beautiful. He befriends Wang Rin who is played by Hong Jong-Hyun is a good friend of the royal family and his bodyguards. The beauty of a woman with Eun San’s shirt played by Yoona appears in front of the two young men. She was the daughter of the richest man of the time, the three became good friends, but circumstances changed after Wang Won and Wang Rin both fell in love with Eun-San.

SBS drama ‘My Sassy Girl’ starring Gyun Woo (Joo Won), Princess Hyemyung (Oh Yeon Seo), Kang Joon Young (Lee Jung Shin), Jung Da Yeon (Kim Yoon Hye), and others. ‘My Sassy Girl’ s first script read took place on 21 December 2016 at MBC Broadcasting Station in Sangam, South Korea. This drama starring Wang Won (Siwan), Eu ‘was produced in August 2016 and completed in March 2017. The drama began airing on May 29, 2017 on Monday-Monday. The drama series is a romantic comedy genre that you must watch. This drama is about love first sight that finally united and married. Korean drama My Sassy Girl tells of a romance romance in the Joseon Era between a cool city scholar Gyun-woo known as “the national treasure of Joseon” and innocent daughter Hye-myung in the Joseon Dynasty era. They are two opposite personalities. Gyun Woo is a cold man, while Princess Hyemyung is known as a woman who raises many problems.

May 5, 2018 Ria Comments Off on 4 Korean Dramas Adapted from Japanese Works
Rank&Talk STAR

February 28, 2017 Tri Comments Off on Gong Yoo to Hold A Fundraising Bazaar With Fans
MOVIE VIDEO