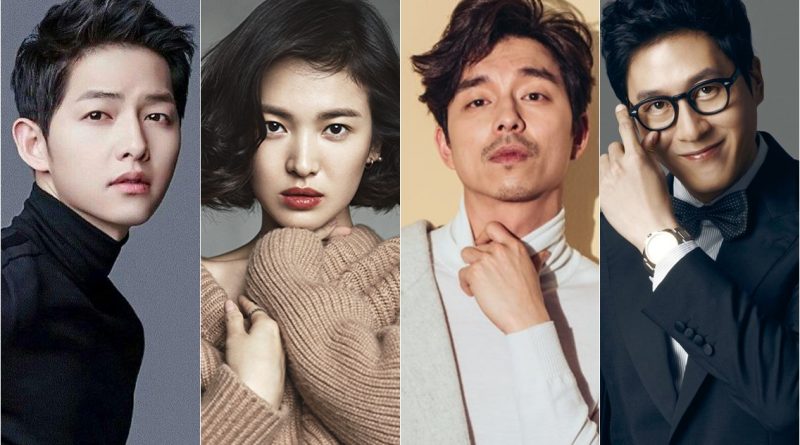 For 3 weeks, from November 8 ~ 28 2017, Gallup Korea conducted a survey of 1700 correspondents over the age of 1 year from all cities (except Jeju), about two people showing the most remarkable performance, the result stated Song Joong Ki and Song Hye Kyo gets 17.9% and 9.55% respectively and occupied positions 1 and 3.

Song Joong Ki and Song Hye Kyo acted as Yoo Shi Jin and Kang Mo Young in the KBS hits drama ‘Descendants of the Sun’, last year. After that, both are known as ‘Song-Song Couple’ and at the end of 2016 was named the ‘shining artist of the year 2016’ and ranked 2nd and 3rd.

Both do not have any work this year, but the sudden marriage announcement in July until the wedding in late October is considered more beautiful than the drama and the love story which is not only a conversation in Korea but also in China and other Asian countries. Song Joong Ki starred in KBS drama ‘Innocent Man’ in 2012 and he also earned first place at that time.

In the second position is Gong Yoo who gets a vote of 10.1%. He plays a role in the drama tvN ‘Goblin’ which began airing in December last year as a goblin ‘Kim Shin’. The ‘Goblin’ drama was voted ‘The Most Korean Loved TV Program’ ranked first in January by Gallup Korea. It beats ‘Infinity Challange’ which is in position one for 27 months.

Position 4 is Park Bo Gum with 8.3%. Although this year he has no work, but last year he won first place. Park Bo Gum began to be loved when acting as a bad athlete named Taek in the tvN drama ‘Reply 1988’ which aired in November 2015 until early last year. The first half of last year, he again exuded his charm as a crown prince in the KBS drama ‘Moonlight Drawn by the Clouds’ and created Park Bo Gum syndrome. This year he has greeted fans through CF rather than dramas.

Lee Jong Suk and Bae Suzy who starred in the SBS drama ‘While You Were Sleeping’ were ranked 5th and 6th with ratings of 7.0% and 4.3% respectively. In 2013 Lee Jong Suk also won the same position through SBS drama ‘I Hear Your Voice’. He also received much praise when starring in MBC ‘W’ drama as Kang Chul, the comic figure, last year. This year he plays Jung Jae Chan, a prosecutor who can see an incident through his dream.

Bae Suzy earned the nickname National First Love through the film ‘Architecture 101’. She debuted as a member girl group Miss A and is active in acting career. This year, she plays the role of Nam Hong Joo who can see the accident through her dream in the drama ‘While You Were Sleeping’.

Kim Hee Sun is ranked 7th with a 4.2% voting. She returned to play drama in ‘Woman of Dignity’ after 2 years ago starring in MBC drama ‘Angry Mom’. Actor Lee Soon Jae who celebrates 60 years of his debut and Kim Joo Hyuk who died in an accident last October ranked eighth with a 3.2% gain.