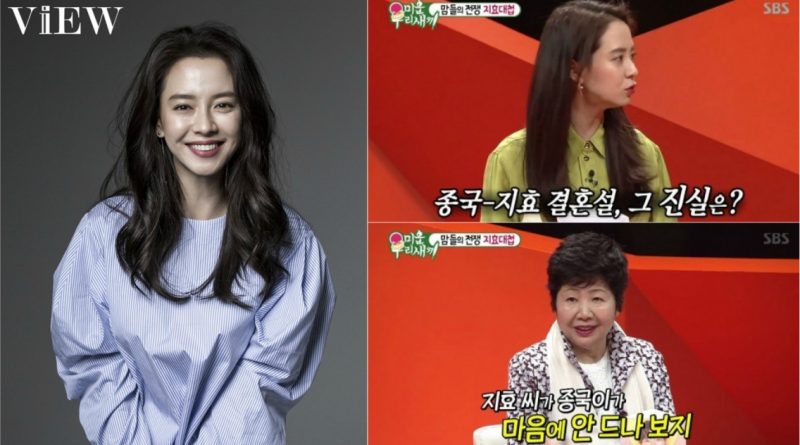 Song Ji Hyo appeared as a special MC on SBS’s ‘My Little Old Boy’ that aired yesterday on 18th of march.

“Because I am really close to Kim Jong Kook, I heard a lot about that rumor. We’re just laughed it off” said Song Ji Hyo.

The mother of Kim Jong Kook said, “I think she doesn’t like Kim Jong Kook that way. That’s only a scandal, there’s nothing like that” and then Song Ji Hyo added, “we worked together so we have to stay professional and have no feelings for each other.”

But their mothers actually supported their relationship and told Song Ji Hyo that Kim Jong Kook is very dependable. Furthermore the mother of Kim Jong Kook said to her, “I’ll tell you later somewhere” that caused a huge laughter on the scene.

Kim jong Kook’s mother showed her concerned about her son who is recently addicted to sport and said that she is afraid that women will hate her son. Kim jong Kook will always head straight to gym even after 10 hours of flight that showed how much of a gym freak he is. And then the mother of Kim jong Kook asked Song Ji Hyo,”you wouldn’t like that too, right?”

Song Ji Hyo responded with a smile, “I think Kim Jong Kook exercise to maintain his character in Running Man. Whenever a male guest come, they will face Kim Jong Kook and they will always wonder in amazement on his strength.”

Song Ji Hyo also revealed her family stories and her belief when she was a child that successfully gained attentions of the mothers.