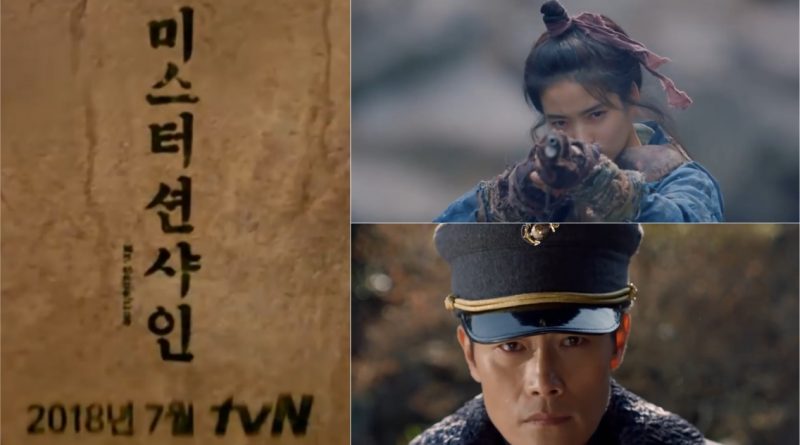 The first Historical Drama entitled ‘Mr.Sunshine’ that is written by the writer of ‘Goblin’ Kim Eun Sook has finally been unveiled.

This drama is a about a boy who joined the united states troops at the end of the Joseon dynasty which later found abandoned by the American troops and return to Korea.

Born on the end of 1800 as a slave in Joseon Dinasty, Choi Yoo Jin (Lee Byung Hun) left Korea and joined the American troops after witnessing the death of his parents but as a few years passed he ended up abandoned by the Americans.

When he returned to where he was born, Joseon, he met a woman named Go Ae Shin (Kim Tae Ri) that will shakes his fate.

She is a woman born from the most nobel family in Joseon. While she tried to protect Joseon Dynasty, she met Yoo Jin.

But on in the side of Go Ae Shin there is Gu Dong Mae (Yoo Yeon Seok).

The son of Baek jeong, Gu Dong Mae was always treated badly by his family and the only one who treated him like a human being is just Go Ae Shin.

Then there is Kim Hee Sung (Byun Yo Han) a man that has been known dangerous outside but unknown on the inside.

The first trailer video that has been released showed the whole charactes with the set of the beautiful Joseon.

The amazing and movie-like visual plus the appereances of Lee Byung Hun, Kim Tae Ri, Yoo Yeon Seok and Byun Yo han.

We also get the see the main characters Lee Byung hun and Kim Tae Ri pointing guns at each other, the Joseon military troops who move around Yoo Yeon Seok and even Byun Yo han with his wind costumes.

Kim Eun Sook is the first Korean historical drama writer who wrote a love story with the background at the end of Joseon who is known as the dark history that never been explained in the history.

PD Lee Eung Bok who has successed with ‘Descendant of the sun’ will be the director of this film and he will work together with Kim Eun Sook who wrote ‘Goblin’. This drama is set to air on july in tvN.