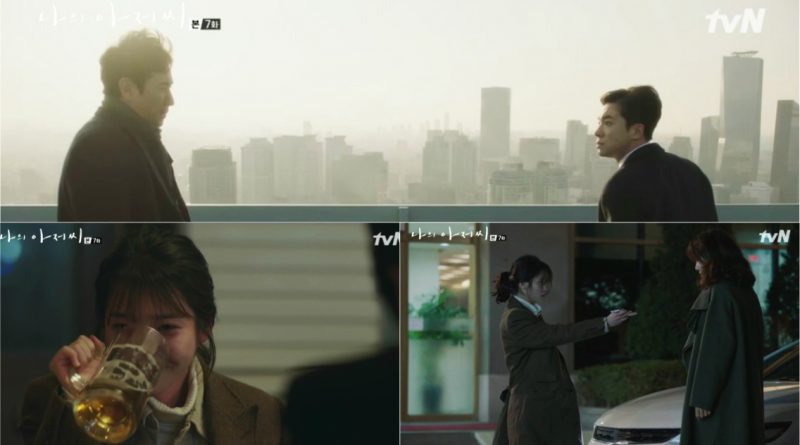 Lee Ji Eun who was always showing Lee Sun Kyun her cold face has finally smiled and laughed in front of him. It seemed to be the beginning of their love affair.

On the 7th episode of tvN drama ‘My Ahjussi’ that aired yesterday showed a development of Ji An (Lee Ji Eun) and Dong Hun (Lee Sun Kyun) relationship.

Previously, Dong Hun expressed his disappointment after he found out the affair between his wife, Yoon Hee and his boss. Dong Hun asked Do Jun Young to end his relationship with his wife, Yoo Hee but Do Jun Young who was angry refused and said, “if you want us to beak up, you’ll have to try hard”.

Dong Hun later had an argument with Jun Young in the rooftop of their company. The two were involved in a feisty fight and then Do Jun Young said, “let’s see how far you can go”. Lee Ji An who listened their arguments through the phone worried about the Dong Hun’s safety as she ran to Dong Hun’s wife.

She then told her, “I wonder how does the woman who cheated on her husband look like, so she looks like this. You better wake up and get it together before it’s too late” she said before playing the recorded voice of Do Jun Young.

After meeting Yoon Hee, Ji An found Dong Hun who has been waiting for her in a restaurant where he had drinks with her once. Dong Hun asked the owner of the shop, “Do you see a young pretty girl with odd clothes and cold look on her face?” and then he entered the place.

Dong Hun later said, “Let’s be happy” while clinked Ji An’s glass of beer with his. The two stared at each other while drinking their beer before they burst into laughter. With Ji An smiling, the expression of Dong Hun’s face has brightened. The spring has come to their hearts but somehow they will face another crisis as Jang Ki Young was staring at the them from afar.

Since she seemed to developed feelings towards Dong Hun, the attention is now focused on whether what kind of changes will happen to the life of the two.