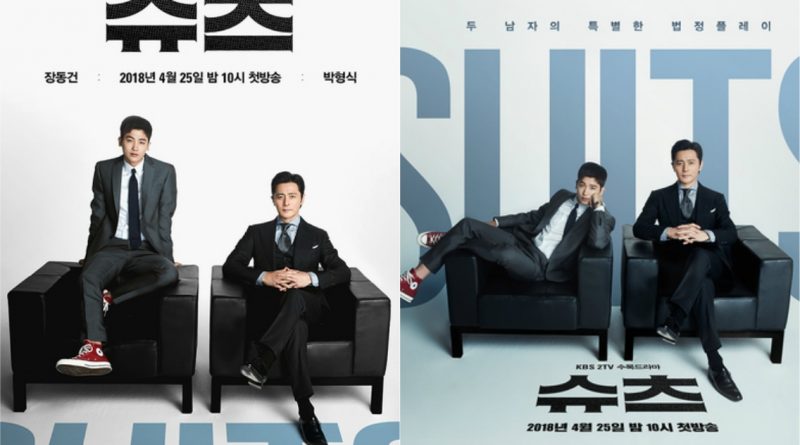 KBS’s newest drama entitled ‘Suits’ that will air in on 25th of April told a story of a Korea’s Legendary lawyer and his bromance with a new lawyer with gifted memories. Jang Dong Gun and Park Hyung Sik will be the main leads in this drama that gained a lot of attention.

Meanwhile, the long-awaited drama released its main posters that gained a lot of attention from the viewers. On 10th of April, the main posters of this drama has been released which showed the charms of the two main actors Jang Dong Gun (who played the role of Choi Kang Suk) and Park Hyung SIk (Go Yeon Woo)

Viewers has become captivated to the charms of the two. Jang Dong Gun is wearing his black leather shoes and a black suit, making him look completely one-tone black from head to toes. His postures showed a confident and charisma of a legendary Lawyer Choi Kang Suk in this drama.

Meanwhile, Park Hyung Sik is looking eye catchy with his youthful, refreshing charm and his manly figure. Unlike Jang Dong Gun, he is wearing a sneakers with a grey colored suits and creating a realistic atmosphere on his character.

KBS drama ‘Suits’ that has gained a lot of attention through the release of its main posters is set to air on 25th of May after ‘Queen of Mystery 2’.

July 13, 2017 Tirta Comments Off on Where Will Song-Song Couple Live after They Get Married?