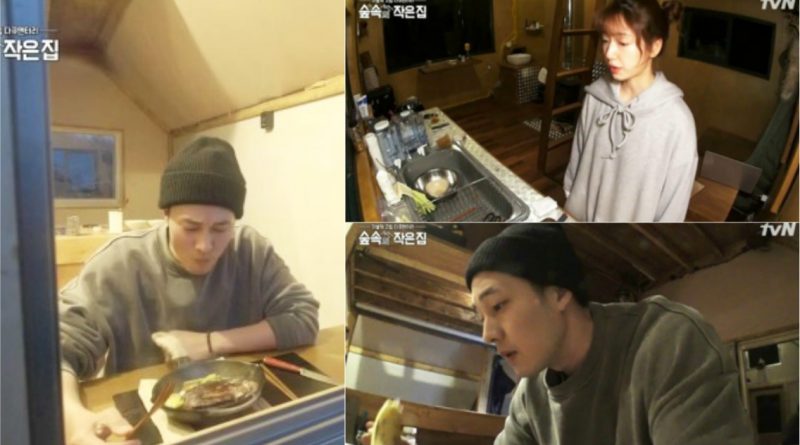 ‘Little house in the wood’ So Ji Sub and Park Shin Hye showed a completely different sides of them in the screen.

In the second episodes of tvN’s newest program ‘Little House in the wood’ that aired yesterday showed a life of Park Shin Hye and So Ji Sub who were voluntary isolated.

So Ji Sub and Park Shin Hye started their completely off-grid life. They were given a mission to make their own appliances according to their needs and park Shin Hye decided to make some hanger.

Park Shin Hye said, “How can I make it well?” and then she saw the branches and started to collect every branches she can find before she started to work on it. She also made a towel rack with the woods.

Meanwhile, So Ji Sub did everything without a single word. He tied the hanger to the strings instead of tree. He also gained a lot of attention after successfully made everything without any difficulties. He also made a key peg using the nails that digs through the walls easily which exactly the opposite of Park Shin Hye.

They also looked completely different when they’re cooking. So ji Sub cooked the beef and vegies on the fan using salt and paper. So ji Sub also ate peacefully and the serious look on his face made the viewers fell in love with him.

Park Shin Hye’s special recipe is also gained a lot of attention. She cooked the mackerel stew and made a few boiled vegetbales, kimchi and also rice.

When she was cooking, Park Shin Hye said, “it’s boring. I’m bored because there’s no music but I guess it’s nice too since I can concentrate on cooking” she said, showing the positive effects of her mission.

July 7, 2017 Tirta Comments Off on Song Joong Ki and Song Hye Kyo are Getting Married on October 31st
DRAMA VIDEO

May 24, 2017 Tirta Comments Off on Park Seo Joon Returns on the Television Screen with ‘Fight for My Way’
MOVIE VIDEO

November 26, 2017 Ria Comments Off on Jung Hae In Shows Manly Charm in His Latest Movie