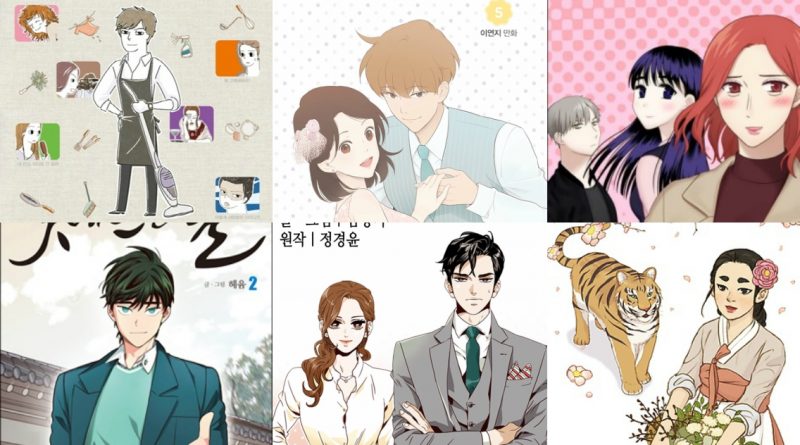 DRAMA
April 19, 2018 CastKo Gyeryong Fairy Tale, My ID is Gangnam Beauty, Something About Us, The Rise of Moon in the Day, Why Secretary Kim, Your House Helper

Those dramas were the popular drama that aired on tv. The resemblance of all of these dramas is that these drama were adapted from Webtoon.

Being adapted from popular webtoon with the same title, they successfully scored a high viewer ratings.

These dramas earned their popularity through the online communities, social media users and also YouTube.

The internet users also often discuss about the actors and actresses that they’d wish to appear in the drama that was adapted from their favorite Webtoon.

Because of all the sensations created in between the fans and the internet users, here is the list of popular webtoon that will be adapted into drama this year.

The popular webtoon by Lee Jung Yeon ‘Your House Helper’ that has been released up to its third season is now ready for production.

This webtoon told a story about Kim Ji Woon, a male housekeeper for a woman who has tired of her works, relationship and her love life.

This drama is scheduled to air in KBS on June this year.

Webtoon by Lee Yeon Ji ‘Something About Us’ told a romantic story between a man and a woman in their 2s who are contemplating between love and their friendship.

This is one of the famous webtoon from Lehzin Comics.

Meanwhile, Seo Kang Joon has confirmed his role as the main lead Ha Woo Jin while the lead woman, Do Ga Young hasn’t been decided yet.

Eventhough the broadcast time of this drama is not yet decided, this drama will start shooting this year.

3. The Rise of Moon in the day

The writer He Um wrote the famous webtoon ‘The Rise of Moon in the day’ that told a story of a conflict between a man and a woman who got trapped in between the past and the future.

This webtoon is also mentioned as ‘Romance Thriller’ because this webtoon is not only tell a story about romance but also a conflict that gives such a thrill to its reader.

The broadcast station and the actors who will play the main characters of this drama is not yet decided but this drama is scheduled to air in the second half of this year.

This ‘Why Secretary Kim?’ drama was adapted from a novel by writer jUng Kyung Yoon and Kim Kyung Mi that is set to air on this May.

This webtoon told a story of a chaebol from second generation that fell in love with his own secretary who is loyal to him..

Park Seo Joon will play the role of the main lead Lee Young Joon, a CEO of a company. Park Min Young will play a role of Kim Mi So, the secretary.

This drama is set to air on June this year.

5. My ID is Gangnam Beauty

‘My ID is Gangnam Beauty’ is a popular webtoon that was relased in 2015 and was published by Naver Webtoon.

This webtoon told a hardship of a woman who struggled to live in the modern society.

The production team of this drama is still unknown and the script-writer, PD even the actors are still in discussion.

Actress Im Soo Hyang is expected to play the role of Kang Mi Rae who struggle to live her new life after plastic surgery.

Gyeryong Fairy Tale is a webtoon that told story of a fairy from Gyeryong that became a barista through the Goryeo and Joseon dynasty.

This webtoon was published on march 2017 and ended at 14th of March this year that successfully satisfied its readers.

As if wanting to console its fans, the writer later announced that this webtoon will be adapted to a drama. Actress Kang So Ra has confirmed her role as Sun OK Nam and actor Yoon Hyun Min will play the role of Jung Yi Hyun.

Meanwhile there are no further information about its production, but this drama is set to air later this year.

May 10, 2018 Ria Comments Off on 4 Celebrity Couples Who Become More Intimate After Getting Married
DRAMA Rank&Talk