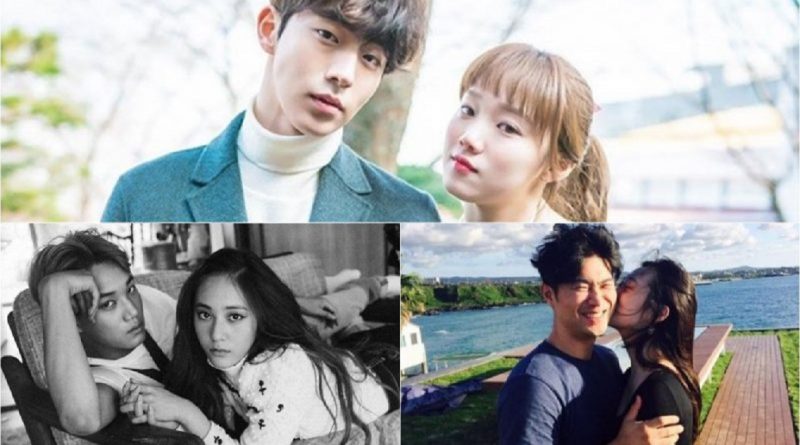 Nam Joo Hyuk and Lee Sung Kyung received the love and affection from the many fans after starring in MBC drama ‘Weightlifting Fairy Kim Bok Jo’. But apparently, it was not their first meeting. Nam Joo Hyuk and Lee Sung Kyung have been friends since they are still struggling in the modeling world. Both announced publicly that they are dating on April 24 this year, unfortunately, the relationship ended on August 18, 2017. It is unfortunate that both should split up when they haven’t spent that long being in a relationship.

EXO Kai and f(x) Krystal both work under SM Entertainment. Born in the same year (1994), the two have been friends since they were trainees. Although they are busy with their own schedules, they decide to start dating in the middle of their activities. After dating for a year and a month, Kai and Krystal broke up on May 31, 2017.

Shin Ha Kyun and Kim Go Eun announced their relationship in August 2016, both claiming to start dating around June. They have the same hobby that is scuba diving and trying to overcome the age difference of 17 years. Kim Go Eun and Shin Ha Kyung broke up on March 21, 2017 after 8 months of dating.

IU admitted that she was in love with Jang Ki Ha, an Indie singer. Although they are separated by 11 years age gap, but both feel comfortable with each other because they have the same interest in music. According to reports, both often talk about music and naturally their relationship develops. They dated in October 2015 and broke up on January 22, 2017 when the relationship was almost 3 years old.

Sulli and Choiza, a hip hop singer from the Dynamic Duo have a close ‘senior and junior’ relationship before they’re dating. Then their feelings developed and they start to going out. Their relationship can be said to be the most open relationship in Korean entertainment history. Sulli often uploads her closeness with her boyfriend on the SNS and lets people know about her relationship. The media continues to be decorated with their photos. Then they broke up. Even so, Sulli is still an icon that people often talk about. Most of the photos she uploads on SNS gained a great interest from the public.

The two immediately confirmed their relationship in May 2016, after being caught by the media. Lee Sang Yoon and Uee started dating in January 2016 after being introduced by a friend. Dating for a year then they split up on January 24, 2017 ago.

Being a public figure then dating is not an easy thing for celebrities, especially in Korea. Many people find these news to be quite unfortunate, but perhaps that is the best way out for them.

August 15, 2017 Tri Comments Off on ‘Goblin’ Becomes the Korean Drama With The Highest Rating In Taiwan
STAR VIDEO