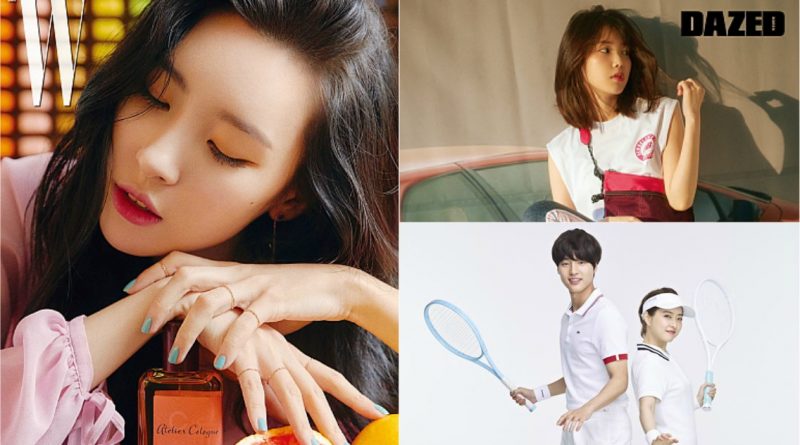 Recently a few pictorial of popular stars like Sunmi, IU, Park Bo Young and Yang Se Jong has been released.

Singer Sunmi turned into a stunning woman in Paris

Singer Sunmi has turned into a very captivating woman in Paris with her fresh look.

On 23rd of April, Korean fashion magazine ‘W Korea’ revealed a pictorial that promote the perfume that was made by French Nichl house in Paris with Sunmi as its model.

The pictorial was done in Seine River, Paris. It is said that Sunmi showed her fresh and lively charm and excitement as if she enjoys her trip, especially her facial expression that perfectly fit the scent of Raw grapefruit.

New Balance unveiled ‘608 Original’ with IU as their muse

IU has became a new face of New Balance through the pictorial of Dazed magazine.

The famous worldwide sport brand New Balance has released a picture of IU wearing its newest edition of shoes that was made for IU as their muse.

It is said that IU has her own special and simple style that very sportly and might look completely different. IU in the picture was wearing her 608 Original Sneakers matched with her wide pants and a shirt where there’s a logo of the brand on it. She has created a perfect yet dazzling summer style.

According to New Balance, 608 Original is a sneaker that was adapted from the dolly shoes that has been a trend lately. The combinations of stylish look and stunning charm revealed the dazzling charm of IU.

Toreta was a re-freshing drink from Coca cola’s company and it has released its pictorial of park Bo Young and Yang Se Jong as its new face. The two of them was wearing a tennis couple outfit that perfectly fit the spring.

In the picture that was released yesterday, Park Bo young and Yang Se Jong were playing tennis in the middle of warm spring with full of spirit. The two play the role of tennis couple with a very refreshing mood.

April 23, 2017 Tri Comments Off on Suzy Becomes the MC of ‘Baeksang Art Award’ 2 Years in A Row
MOVIE VIDEO

November 27, 2017 Ria Comments Off on Celebrities Winter Fashion at The Premiere of ‘Room No.7’