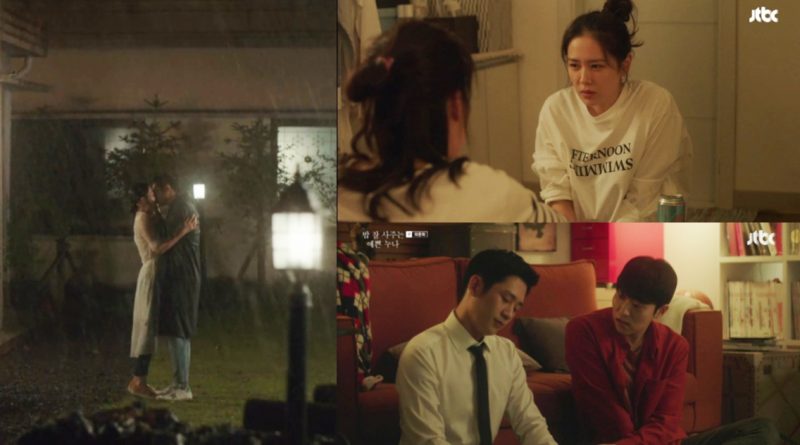 Yoon Jin Ah and Seo Jun Hee was separated by their choice to protect their love in the last episode of JTBC drama entitled ‘Pretty Noona Who Buys Me Food’ that aired last week.

The two of them reunited with the awkward silence in the air as they tried to avoid any eyecontact at all cost when they attended the wedding of Yoon Seung Ho.

Upon seeing her reaction, Yoon Jin Ah’s friend said, “You look like someone who saw her dead past lover who came back to life. You said you have forgotten him, you said you no longer remember the feelings you had with him” she said and the Yoon Jin Ah replied, “I became confused when I see my past lover. I guess it was just illusion of mine” she said, then latter expressing her uneasy feeling while sating “What should I do?”.

Seo Jun Hee also told his friend after he met Yoon Jin Ah, “when I was in America, the only thing that often came to my mind is that I want Yoon Jin Ah to not live a happy life” and then he added, “It would be nice to see her happy but, she is not happy at all.

Then later, Seo Jun Hee Friend said, “you just broke your heart, are you going to try it again? Don’t do it” he said and Seo Jun Hee nodded and replied, “Don’t worry. I don’t think that kind of thing will happen again in the future”.

Meanwhile, Jin Ah is currently dating with her new boyfriend and she doesn’t happy because of the latter’s bad behavior. Jun Hee who saw them and knew about it couldn’t really explain what he is feeling and just passing by as if he didn’t saw her.As the time passed, the appearances of the two of them had changed.

After that scene, it’s hard for them to concentrate on their daily lives because the lingering feelings that they’re feeling. Yoon Jin Ah decided to bailed out from the relationship with his boyfriend and handed her resignation letter to her company. She had arranged everything and went to Jeju.

Finally, Seo Jun Hee went to Jeju island to meet Yoon Jin Ah. When they met, he told her, “Everything is my fault. I’m sorry. I really can’t live without Yoon Jin Ah. Once again please look at me” he said while confessing his feeling towards Yoon Jin Ah. Jin Ah then latter said, “What’s there to see” before the two of them kissed and ended their love story with a happy ending.