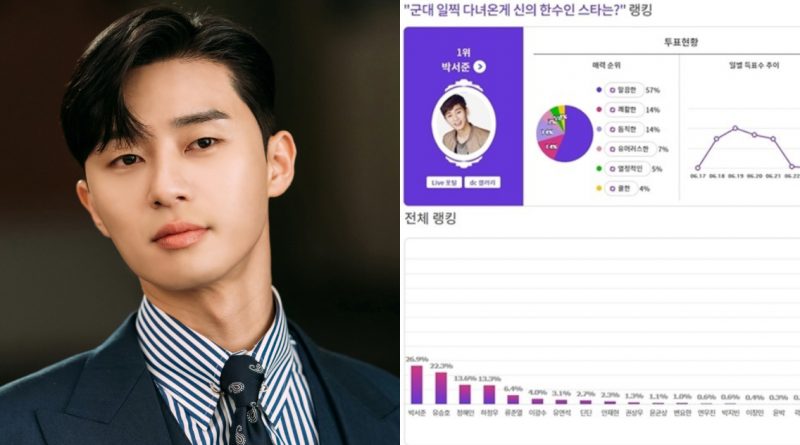 All the internet users had chosen actor Park Seo Joon as the top star who has finished his military enlistment in the early of his youth.

Park Seo Joon recently topped the rank of a poll with the category ‘The top star who has finished his mandatory military duty in early in his youth?’, the voting was done for 7 days straight starting from 17th to 23rd June 2018.

Park Seo Joon successfully landed in the first position with 842 votes (26.95) from 3.133 votes, he debuted as an actor after finishing his military service which he enlisted as soon as he finished his education. As the result, he can now focus on his career without worrying about the mandatory service absent and now he is one of the most popular actor in this generation.

Korean actor Yoo Seung Hoo is in the second position with the total vote of 700 votes (22.3%). Yoo Seung Ho made his debut as a child actor and then took an absent to finish his military service as he finished his duty in the age of 21. Now he can focus in his acting career and actively took parts in dramas and movies.

In the third position there is actor Jung Hae In with the total votes 425 (13.6%). Jung Hae In who went for his mandatory military service in the age of 21 made his debut on screen in the age of 26. After taking roles in various drama and movies, he finally climbed to the top of stardom by playing the role in popular drama ‘Pretty Noona who buys me food’ which aired earlier this year.

And then there are actor Ha Jung Woo, Ryu Joon Yeol and also Lee Kwang Soo following up in the list.

May 26, 2017 Tirta Comments Off on ‘The Sheriff in Town’ Press Conference