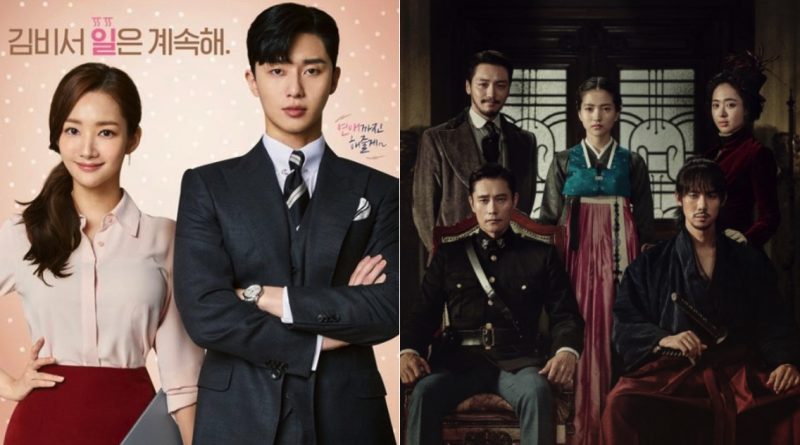 In the tv drama section, drama tvN ‘Why Secretary kim’ has become the number one talk of the town for six weeks in consecutives.

Then the second place belonged to the tvN newest drama ‘Mr.Sunshine’ that has slightly closing the gap with 1 % difference. Park Seo Joon in drama tvN ‘Why Secretary Kim’ has become the number one most-talked main lead for three weeks in consecutives and Park Min Young is right in the second rank.

OCN drama ‘Life on Mars’ has successfully climbed up two rank from the fifth position last week and drama JTBC ‘Miss Hammurabi’ went down one rank to the fourth as it previously was on the third position.

From the fifth position to the 10th is filled with KBS ‘Are You Human Too’, MBC ‘Come Hug Me’, tvN ‘Let’s Eat 3’, SBS ‘Greasy Melo’ and Let me Introduce her’ and the last is none other than KBS ‘To Jenny’.

tvN’s drama ‘Let’s Eat 3’ has reached the seventh position a week before its first broadcast that showed off the strong presence of this drama because of the loyal fans of the main lead, Yoon Doo Joon.

Following Park Seo Joon and Park Min Young, Lee Tae Hwan reached the fifth position following Kim Tae Ri in the third position, Lee Byung Hun in the fourth position and Yoo Yeon Suk in the sixth. The 8, 9 and top 10 position including Yoon Doo Joon and Baek Jin Hee from ‘Let’s Eat 3’ and Jung Kyung Ho who is currently starring in OCN ‘Life on Mars’ in the 10th position.

This result were record by the company who is in charge for analyzing the viewers responds towards 32 dramas that is currently air and will air soon starting from 9 to 15th of July.