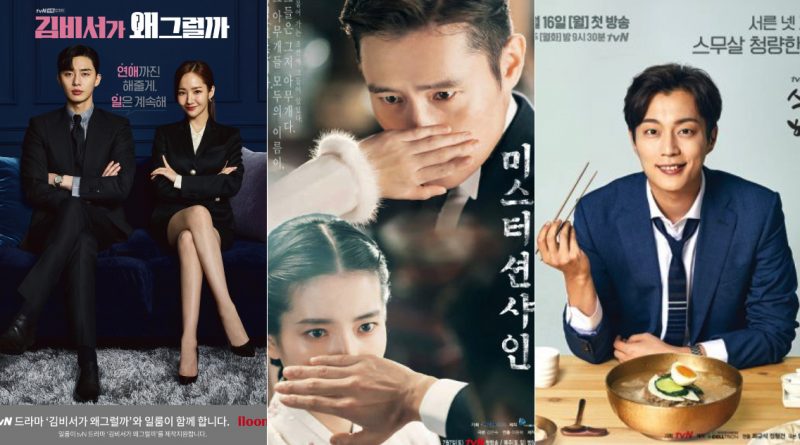 Started from ‘Mr.Sunshine’, ‘Why Secretary Kim’ and ‘Let’s Eat 3’ these are the three popular drama from tvN nowadays.

According to the Good Day Corporation which is an agency that observe the popularity of tv dramas, in the third weeks of July apparently ‘Mr.Sunshine’ has successfully make a lead.

The drama that aired for the first time in 7th of July tells a story of a Korean man who left his homeland with the U.S warship in 1871 and returned to Joseon as a delegate of America. Lee Byung Hun, Kim Tae Ri, Yoo Yeon Suk, Byun Yo Han and Kim Min Jung also Jo Woo Jin are the main line-up stars for this drama.

The second popular drama is none other than ‘Why Secretary Kim’ that tells a story of a rich, talented and goo looking guy but a very narcissists Lee Young Joon (Park Seo Joon) who fell in love and head over heels with his secretary Kim Mi So (Park Min Young).

‘Why Secretary Kim’ has become the most-talked tvN drama for seven weeks in consecutives but now it had to give up its first position to ‘Mr.Sunshine’. Despite all of that, it is successfully stayed in the second position that gained the viewers interest.

‘Let’s Eat 3’ is a drama that seemed successful on capturing the viewers heart.

‘Let’s Eat 3’ tells a story of a man named Goo Dae Young (Yoon Doo Joon) who will share love, memories and also delicious treat and dishes together with Lee Ji Woo (Baek Jin Hee). Yoon Doo Joon and Baek Jin Hee will showed the two different side of their character who had live in 2004 and also 2018 in this drama.