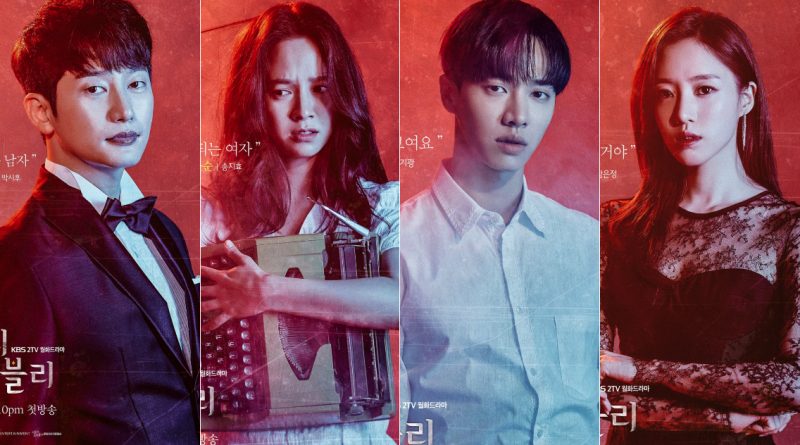 The character posters of KBS’S newest drama ‘Lovely Horribly’ has been unveiled.

‘Lovely Horribly’ is a romantic comedy drama that tells a strange occasion that happened between a man and a woman who live their fate differently as they met as the top star and the writer. Philip (Park Shi Hoo) and Eul Soon (Song Ji Hyo) were born in the same time but the two of them live a different life just like the zero sum theory. In the end of the meeting between a woman and a man who were trapped in their fate with the touch of horror and melodrama will give a new kind of colorful love story.

First, Park Shi Hoo showed his charismatic character which is a man who can do anything and always lucky. Philip is a perfect man from head to toes and this perfect man is about to face the life changing moment in his life as he turned 34.

Song Ji Hyo transformed herself to a perfect icon of bad luck as she expressed her dark kind of charms. In the poster with the words written ‘a woman who can’t do nothing good’ she was seen with her messy hair while hugging the typewriting machine as she showed a different charm with Park Shi Hoo character.

Lee Gi Kwang played the role of a man named Sung Joong, a rookie PD that will work together with Eul Soon and he is the main key of the story in this drama that captured the viewers attention already.

Ham Eun Jung will play the role of the official girlfriend of Philip and a famous actress who is loved by many people named Shin Yoon Ah.

Choi Yeo Jin will created a mysterious atmosphere through her character which is a drama writer Ki Eun Young who is known as the rating hit maker.

‘Lovely Horribly’ is set to air for the first time in KBS in 13th of August at 10 pm local time.

September 21, 2017 Ria Comments Off on [RANK AND TALK] 4 Idols With Unsual Airport Fashion