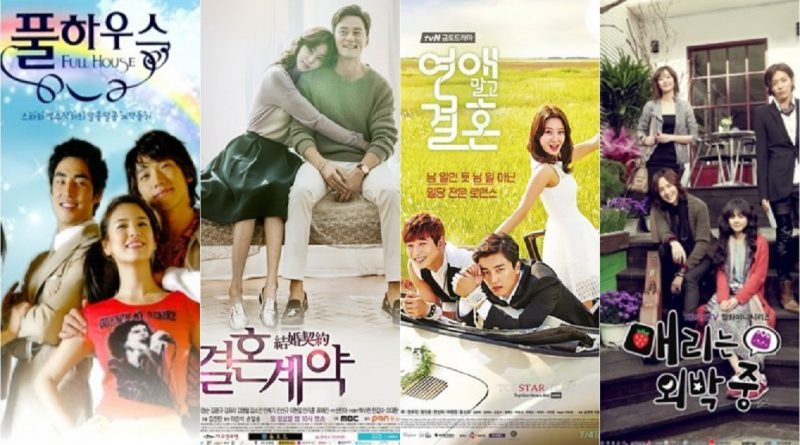 From the title alone we already know the theme raised in this drama. The story in this drama is so touching. Kang Hye Soo (Uee), a young widow with one daughter. Their economic situation is very pitiable. The dead husband left them with debts. Hye Soo worked hard to support her family. Then she meets Ji Hoon (Lee Seo Jin), a wealthy bachelor. Hye Soo works at Ji Hoon’s restaurant. One day, Hye Soo hears the news that her boss is in need of a heart donor. The donor will receive a compensation if she is willing to donate her heart and marry him for the sake of legality. Hye Soo also volunteered as a donor.

This one has a comedy genre. Joo Jang Mi (Han Groo) has a dream to get married soon. However, her boyfriend Lee Hoon Dong (Heo Jeong Min) just abandoned her. Lee Hoon Dong’s friend Gong Gi Tae (Yeon Woo Jin) does not like the idea of marriage, but constantly gets pressure from his mother to get married. Finally, to avoid his mother’s matchmaking, Gong Gi Tae makes a contract marriage deal with Jang Mi. Jang Mi agrees because she wants to take a revenge on her former lover.

4. Mary Stayed Out All Night

This is the debut drama of Jang Geun Suk. It’s about a woman named Mary (Moon Geun Young) who wants to stop her father’s plans. Mary and her family live in the midst of being pursued by the debt collectors. Then his father’s friend came to save them. But apparently, there is a reward for paying off Mary’s father’s debt. Mary had to marry the son of her father’s friend Jung In (Kim Jae Wook). Mary asks Moo Kyul (Jang Geun Suk) to pretend to marry her.

Unlike the drama, in real life, contract marriage is not a good thing. The 4 dramas above have an entertaining purpose, so what kind of wedding drama do you like best?

August 16, 2017 Ria Comments Off on Seolhyun Challenged Herself in Her 2nd Movie ‘A Murderer’s Guide to Memorization’
DRAMA VIDEO